Last night I hosted a “Family Math” night for 4th and 5th graders at my younger son’s elementary school. Instead of the format I’d used for the various K – 3 Family Math nights – namely 3 roughly 20 minute projects in an hour – I decided to do a one hour session on the surreal numbers and the game checker stacks.

The idea for the topic came from Jim Propp’s blog post that was tweeted out by Jordan Ellenberg back in August:

Jim Propp has a much richer explanation of surreal numbers than I could fit in my WSJ piece: https://t.co/UT5MNEfAz8

I read Propp’s blog post and was blow away:

Jim Propp’s “The Life of Games”

That led to two really fun projects with my kids:

Walking down the path to the surreal numbers Part 1

Walking down the path to the surreal numbers Part 2

Then, a few weeks ago, I saw Donald Knuth’s book about the Surreal Numbers in an Aperiodical blog post:

Books a 14 year old who is good maths might enjoy

which inspired me to revisit the two prior projects with the boys:

Infinity + 1 and other Surreal Numbers

Last week, as I was waiting for the kindergarten kids to arrive for their Family Math night, I figured the 4th and 5th graders would probably really enjoy seeing the surreal numbers. So I decided to scrap the prior plans for the 4th and 5th grade Family Math night (basically looking at the Collatz conjecture, the Monty Hall problem, and possibly the Chaos game depending on how long the fights about Monty Hall lasted) and do an hour on the surreal numbers.

There’s a little bit of a barrier to get over as the kids (and parents) come to understand the game of checker stacks. One thing that was particularly confusing was the stack whose value was 1/2. The kids wanted to keep stacking the checkers rather than just playing around with the single “blue / red” stack, so I backed up and explained the game a little more carefully and had them explore the single position – a blue / red stack and a single red. This position has a “value” of -1/2 so red should always win. I did, however, not tell them who should win or the value of the position – rather I just asked them to see what happened.

As I fretted that the night was heading down the expected path to disaster as a former math person tries to explain an idea he barely understands to a room full of 10 year olds . . . . the kids started to understand what was going on with the game and the energy level in the room went way up. Way way way up AND it just kept going up and up and up for the rest of the night.

It was also hard (not surprisingly) for the kids to understand the idea that both sides of the game had to play the game to win. That was good, though, because I could have kids come to the front of the room and play against me and ask them lots of questions – can you force me to lose? Can I force you to lose? What choices do you have in this position? Kids were running up to the front to play!

After about 30 minutes we moved on to the “deep blue” and “deep red” chips from Propp’s blog and the night moved from fun to bedlam 🙂 The kids loved “infinity,” they loved “minus infinity” and they (and some parents) told me that I was crazy for saying that the “infinity plus 1” position had a different value than the “infinity” position. It was amazing and awesome to see 10 year olds argue about infinity.

At that point I gave them the quote about the surreal numbers from Siobhan Roberts’s book on Conway: 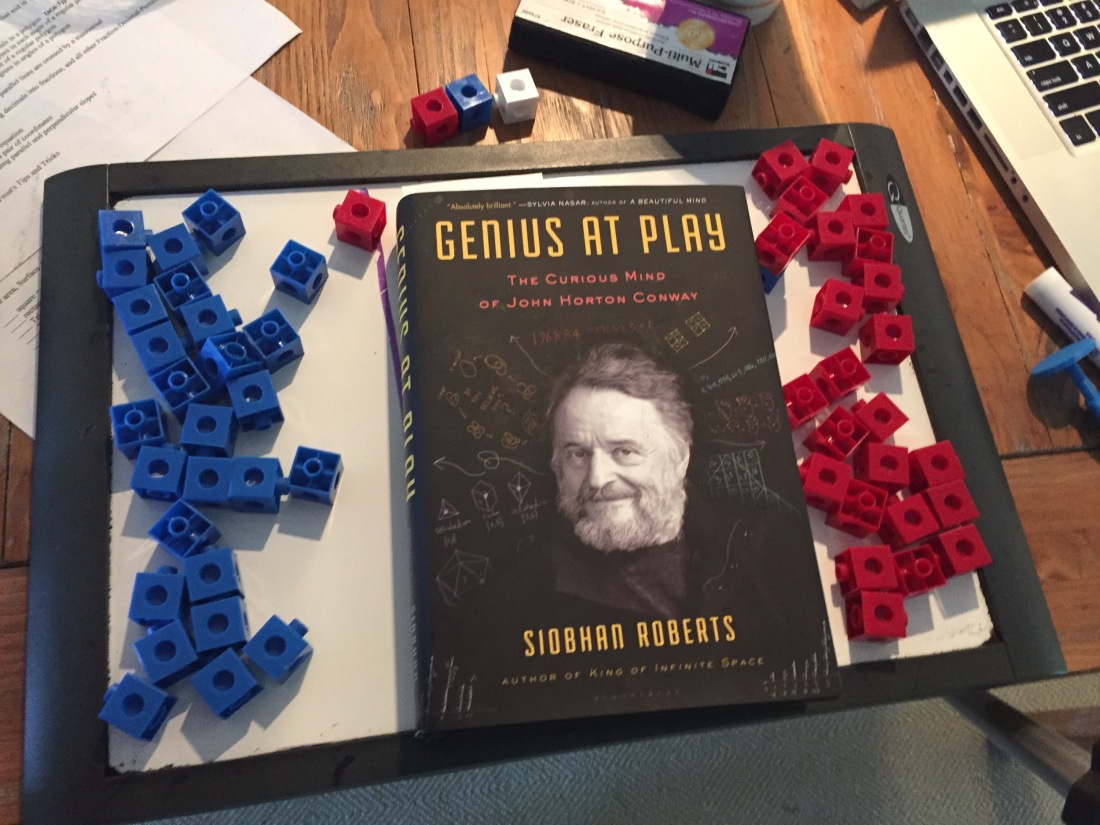 “The first time you see surreal numbers, you break, you just break: your brain cracks open.”

Then we tackled the “blue / deep red” stack whose value is positive, but smaller than any positive number we know. Their jaws were on the floor and more than one kid told me they thought their brain had cracked open. Ha ha.

So, we wrapped up but almost no one left. The parents wanted to talk more, one kids waited around and asked me to explain one more time why the “infinity + 1” position was different than the “infinity” position, one parent insisted that this all made no sense at all but wanted more information – I gave him the link to Propp’s blog, to Knuth’s book, and to Roberts’s book. He seemed satisfied.

All in all, a really great night. Lots of engagement from the kids, lots of debate and general conversation about how to best play checker stacks, and lots of cracked open brains! This night was a neat little experiment to try with kids – it is so fun to see kids spend an hour excited about a seemingly off the wall idea from theoretical math 🙂

3 thoughts on “Sharing the Surreal Numbers with kids”