I’ve been looking forward to sharing two calculus ideas from Patrick Honner with my son for the last week. We were, unfortunately, a little rushed when we sat down and there are a couple of mistakes in the videos below. Even though things didn’t go perfectly, I really enjoyed talking through these ideas.

Here’s the first idea – a twist on integration by parts that Honner learned from the British mathematician Tim Gowers:

Thanks to Sir Timothy Gowers, I always preface integration by parts with "the method of successive approximation":https://t.co/B7iUYbGmjw

Here’s the second idea – a fun surprise when a student made a creative substitution in a integration problem:

I asked my BC Calculus students to integrate 1/(x² – 1) today. One of my students did this! I was blown away by her creative thinking.#math #mathchat #APCalc pic.twitter.com/sZGtPqxZ3j

So, I stared the project by talking about how to integrate arctangent without using integration by parts:

In the last video we found a possibly surprising connection between arctan(x) and ln(x). Here I introduced the integral from the 2nd Patrick Honner tweet above and showed my son how you solve that integral using partial fractions. The point here wasn’t so much the integral, but rather to show that ln(x) showed up in an integral similar to the one we looked at in the first part of the project:

How I showed the technique that Honner’s student used (though I goofed up the substitution, unfortunately, using u = ix rather than x = iu. By dumb luck, that mistake doesn’t completely derail the problem because it only introduces an incorrect minus sign):

Now that we’ve found two connections between arctan(x) and ln(x), we went to Mathematica to see if the two anti-derivatives were really the same. It turns out the are (!) and we got an even bigger surprise when we found that Mathematica uses the same technique that Patrick Honner’s student used 🙂

Also, in this video I find a new way to introduce a minus sign by reversing the endpoints of an integral . . . . . Next we went to Mathematica to see if we could make any sense of this limit. Without realizing it, I had an error in the code that was causing the code to output numerical approximations. My son noticed the error and had me fix it. Unfortunately fixing that error spoiled the surprise in the answer . . . whoops 😦

This was a fun discussion. The follow up discussion later was a neat problem from Stewart that asked you to show that:

for every n. That problem was a nice exercise in derivatives of exponential functions and also techniques of proof. 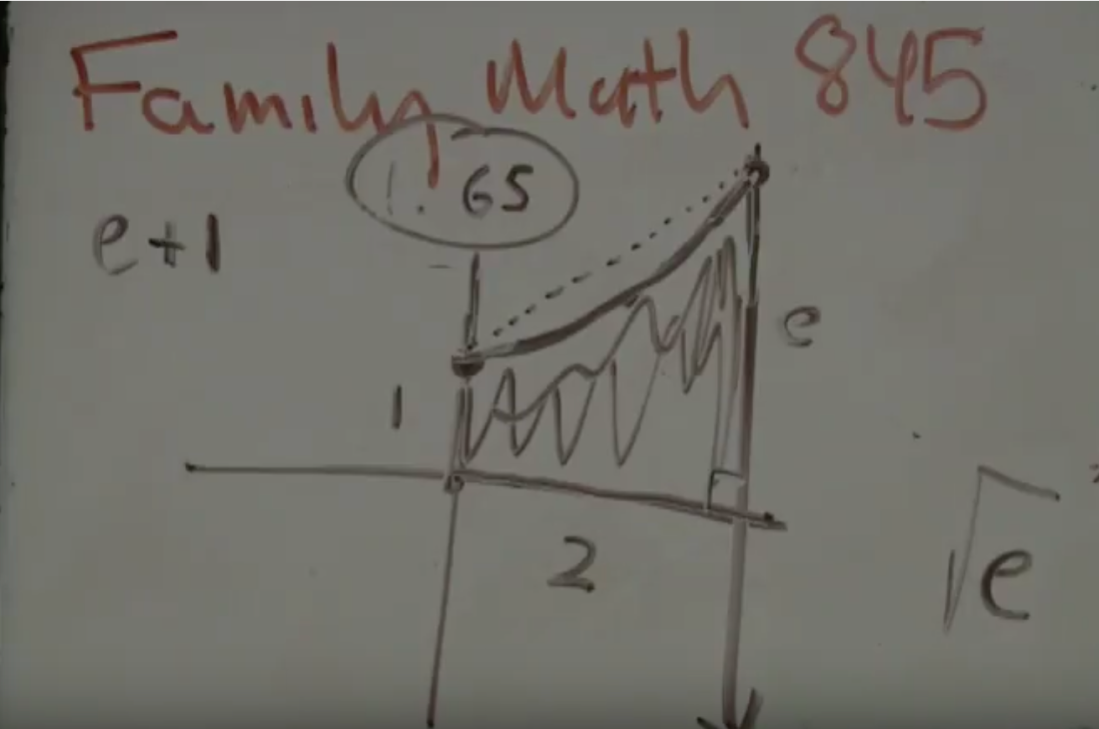 Last night I was curious what the AP calculus questions looked like and was flipping through the multiple choice questions from the 2012 AB calculus exam.

This one caught my eye because I felt that the wrong choices weren’t selected very well and the correct answer was obvious from the choices:

Despite not liking the question so much for a calculus exam, I thought it would make a pretty neat estimation problem for kids. My older son was looking at exponentials and logarithms this week anyway, so using this question as an estimation problem sort of fit in naturally with what he was doing anyway this week.

I started off today’s project by introducing the problem and asking the kids how they would approach it.

My younger son had a bit of a difficult time understanding the problem – which wasn’t a big surprise. My older son wanted to start by estimating what the square root of e was. Not the starting idea I was expecting, but it made for a good estimating problem:

Now that we we’d guessed that

we decided to draw the region.

Now that we had the shape drawn, we could estimate the area. We actually used the idea that it was nearly a quadrilateral to make that estimate.

Finally, we used our estimate of the area (3.71 square units) to see if we could identify the correct answer from the choices given in the original problem:

My son is finishing up a chapter on exponentials and logs in the book he was working through this summer. The book had a big focus on e in this chapter, so I thought it would be fun to show him the proof that e is irrational.

I started by introducing the problem and then with a proof by contradiction example that he already knows -> the square root of 2 is irrational:

Now we started down the path of proving that e is irrational.  We again assumed that it was rational and then looked to find a contradiction.

The general idea in the proof is to find an expression that is an integer if e is irrational, but can’t be an integer due to the definition of e.

In this part we find the expression that is forced to be an integer if e is irrational.

Now we looked at the same expression that we studied in the previous video and showed that it cannot be an integer.

I think my favorite part of this video is my son not remembering the formula for the sum of an infinite geometric series, but then saying that he thinks he can derive it.

This is a really challenging proof for a kid, I think, but I’m glad that my son was able to struggle through it. After we finished I showed him that some rational expressions approximating e did indeed satisfy the inequality that we derived in the proof.

I’m enjoying thinking about how to share Grant Sanderon’s latest calculus video series with kids. My goal is not remotely to develop a calculus course, but just to give kids an opportunity to see and explore some of the basic ideas that Sanderson shares in his video series. At a high level, things like slope of the graph of a function are easily accessible to kids even if the calculations required to make the ideas precise might be beyond them. Our projects so far are here:

So, walking the dog tonight I came up with two ideas for discussion:

(ii) If a function has the property that the slope of the tangent line is the same as the value of the function, what would that function look like?

We began with a quick review / discussion of slope in the context of a curve. This concept is still new to the boys and I wanted to have one quick review before we dove into the main project:

Next we moved on to the right triangle problem – how would the length of the hypotenuse change when one of the side lengths changed? The boys were able to grasp some basic ideas around when the changing side was short (near zero length) and very long (near infinite length), and we were able to make a sketch of what the derivative might look like just from these basic observations:

Finally, we went up to the computer to use Mathematica to explore our two questions. For purposes of this higher level conceptual overview, it is nice that Mathematica’s built in functions allow us to study these two questions without having to do the calculations ourselves:

The more of these project I do, the more I’m convinced that this is a useful exercise for kids. For now at least, I can’t think of any reason why learning about these basic ideas at the same time you are learning about functions will cause problems.

We did a little impromptu talk about the math behind Powerball this morning. We also did a similar talk last summer:

Playing around with the odds of winning Powerball

but I learned this morning that the game has changed slightly since our original talk, so it seemed worthwhile revisiting the topic of Powerball odds today.

The official listing of the odds for each prize in Powerball is here:

The official odds of winning various prizes in Powerball

The specific topics for today were:

(1) What is the probability of winning the grand prize?

(2) What is the probability of getting only the Powerball correct?

(3) Since the chance of getting winning the grand prize is about 1 in 292 million, what is the probability that no one will win if 292 million people pick numbers at random?

The third part was a little hard for the kids to understand than I was expecting it to be, but the extra time we spent talking about this question made the project worthwhile.

Here’s the first part – the chance of winning the grand prize:

The next part was about the chance of getting only the Powerball correct. The FAQ on the Powerball site has a funny comment about this particular prize.

Finally, the talk about no one winning if 292 numbers were guessed took three parts. Here’s the introduction to that question. The kids were a little confused about how to approach it.

I tried to simplify the problem by looking at a case where 2 people guess at a number that is either 0 or 1:

After looking at the easier version of the problem we returned to the problem of no one winning the grand prize in Powerball if 292 million people played. It was sill difficult for my younger son to understand this problem, but we did eventually get to the punchline – the probability is approximately 1 / e.

Where did e come from??

So, a fun project. I’m guessing there will be a lot of conversations about Powerball over the next few days – maybe that’ll get kids interested in talking about the math behind the game, too.

A couple of weeks ago Evelyn Lamb’s article Impossible Wallpaper and Mystery Curves introduced me to Frank Farris’s work. On Saturday I stumbled on his book at Barnes and Noble: 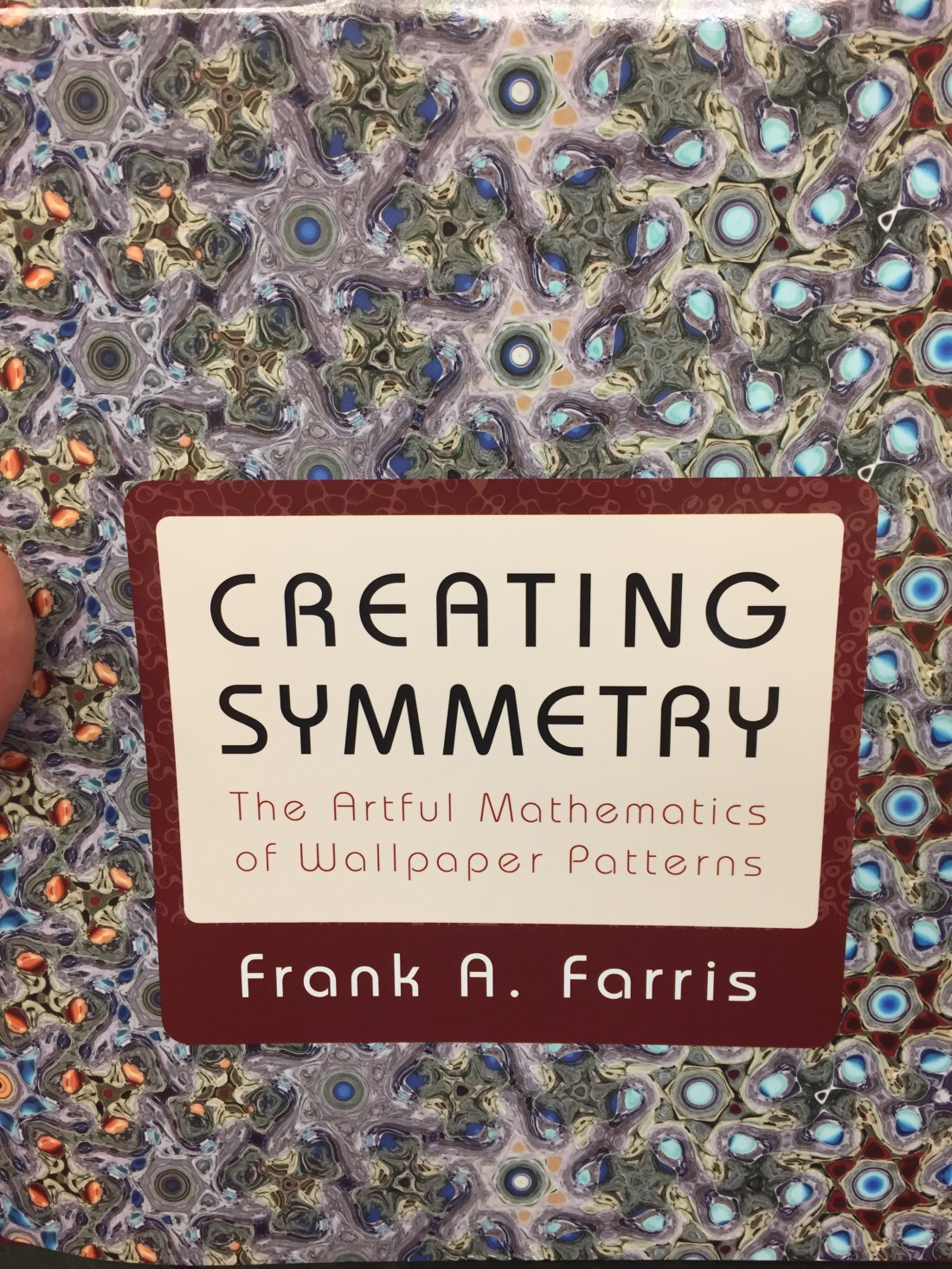 I was excited to try out some of his ideas with the boys even though they use complex numbers and exponentials which are over their heads. We did the whole exploration this morning using Mathematica.

To start, we just explored the exponential function.

Next we moved to looking at sums of two exponential functions. The boys were surprised by the graphs and we played around with a few more examples. They had some interesting ideas about what the pictures looked like, and I’m glad that the pictures also reminded them a little of Anna Weltman’s loop-de-loops.

Next we moved on to sums of three exponential functions motivated by the idea of trying to produce another kink in the loop. There was a little discussion at the beginning of this part of the talk about complex variables. I thought going down this path was going to be too difficult to explain, so I tried to bring the conversation back to the sums. I love the ideas they had about symmetry here.

Next we looked at Farris’s “mystery” shape and played around a bit more with the ideas. These shapes also led to fun conversations about symmetry:

Finally, I let the kids just play around. As I was writing up this project I got a “hey dad, come here and look at this cool shape” call:

So, despite the math underlying these shapes being a little over their heads, the kids seemed to really enjoy seeing these shapes. I loved hearing their ideas and I loved seeing them play around with the ideas for a long time after we turned off the camera.

Also, Farris’s book is absolutely amazing – you’ll love the ideas and the presentation, and probably most of all the incredible pictures he creates from the ideas!