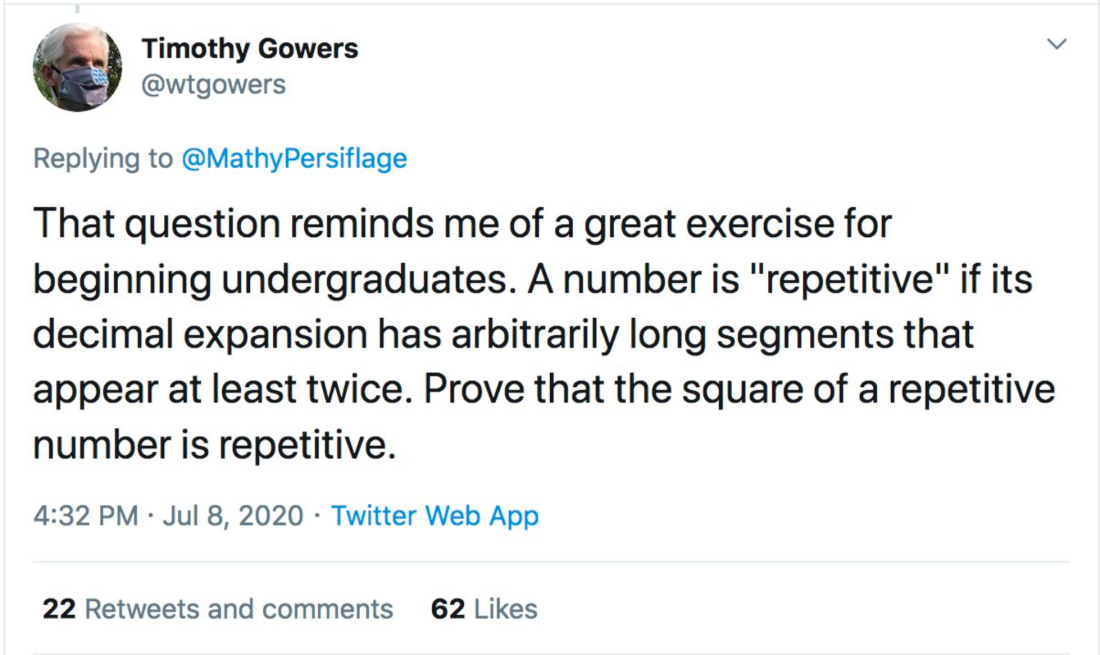 Last week Tim Gowers shared a great math problem on Twitter – here’s my retweet of it (again to help avoid the temptation to get hints in the original thread:

This is a really great math problem shared yesterday by @wtgowers. I'm sharing a pic rather than retweeting to take away the temptation to go to the original thread for hints. You'll know with 100% certainty when you've got it, but there's no rush – just ponder for a while! pic.twitter.com/F2rRp8wH7P

If you’ve not seen the problem before I’d definitely suggest spending some time thinking about it – it is really a terrific problem. The videos below give the solution, so fair warnng . . .

I’d talked about it a bit with my younger son on a car ride back and for to his (outdoor) karate class earlier this week. My older son hadn’t seen the problem until this morning. A discovery that my younger son had made in the car earlier in the week helped the boys solve the problem today, but even with that prior discovery the discussion was still really great.

Here’s how I introduced the problem – you’ll see that some of the elements in the statement of the problem that are pretty standard for mathematicians are a little confusing to the boys. This introduction clears up a bit of the confusion:

Now my younger son gave his explanation for why he thought

At the end of the last video the boys were starting to think that all numbers were repetitive. In this last video they finished the solution to the problem:

I really like this problem and think it is a great way for kids to have a fun – and non-computational – mathematical exploration. As the videos show, some of the ideas can be a little difficult for kids to make precise, but I think that’s just another nice reason to explore this problem with them!

I was listening to the latest episode of Wrong but Useful today:

The Wrong but Useful podcast on Itunes

During the podcast the following “fun fact” came up ->

I thought exploring this fact would be a fun activity for the boys and spent the next 30 min daydreaming about how to turn it into a short project. I also wanted the project to be pretty light since today was the first day of school for them. Eventually I decided to explore various expressions of the form

via continued fractions and see what popped up.

We started by looking at the approximation given in the podcast. During the course of the discussion we got to talk about the relationship between fractions and decimals:

Now we looked at some powers of

While I was on the phone I asked the boys to explore a little bit. Here’s what they showed me when I got back.

Oh, wait – EEEk – I just noticed writing this up that we counted back incorrectly in this video. Whoops! Here’s the number we thought we were exploring ->

Sorry for this mixup.

Next they showed me one more good approximations that they found ->

is nearly an integer. After that I tried to show them one I found but we ran into a small technical problem, so no need to watch the rest of the video after we finish with

Finally, I got the technical glitch fixed and showed them that

So, a fun little number fact to study. Sorry for the bits of the project that went wrong, but hope the idea is still useful!

My older son’s math team has some great review problems that I’m using to talk through topics we haven’t talked about in a while.

Tonight I used a problem about repeating decimals to have a really nice conversation with my older son, and then a different problem from my older son’s homework to talk with my younger son about greatest common divisors. Neither conversation went in a straight line from start to finish, but the winding path hopefully helped them understand the concepts a little better.

The conversation with my older started with a short problem involving repeating decimals. We’ve not discussed this topic recently and the problem gives him a little difficulty initially:

After we finished the problem, we returned to the repeating decimals to see if there was a different way to see why

Finally, we talked about a different way to understand 24 / 99 and saw how that idea applied to a few other repeating decimals.

With my younger son, we talked through a problem about the greatest common divisor. As with the talk with my older son, it has been a while since we talked about this topic. His initial idea is to find all of the factors of both of the numbers in the problem. That’s going to end up take a while, though, so we searched for a few other ideas.

(also, sorry for the door bell and dog barking!)

We wrapped up by finding the prime factors of462 and then finding the greatest common divisor we’d been looking for.

So, to fun conversations about topics we hadn’t talked about in a while. It was fun to hear their ideas and also to watch them slowly find a few ideas that helped them get a better understanding of the topic. Definitely not a straight line to the answers in either case, but that what learning math sometimes looks like.

Since we’ve talked a little bit about continued fractions in the past, this seemed like a great way to celebrate

day. We started with a quick reminder about continued fractions:

. This exercise gives you a great opportunity to talk with kids about fractions and decimals.

Next up was today’s activity – the continued fraction for

Now, having found a few terms in the continued fraction, we went and looked at what fractions other than 22/7 were good approximations to

Finaly (and sorry for the camera screw up on this one), I wanted to show a different continued fraction for

. In a previous video my younger son thought that we’d find a pattern in the continued fraction for

We didn’t in the first one that we looked at, but there are indeed continued fractions for

that do have amazingly simple patterns.

So, a fun little project for

day. A great opportunity to review lots of arithmetic in the context of learning about continued fractions and

We are nearly to the end of our Introduction to Number Theory book. In addition to providing us with many math project that are fun all on their own, I’ve been really happy to find so many great and unusual ways to secretly work number sense. The topic today was writing “decimals” in other bases which gave us lots of time to play with fractions, decimals, and place value.

When I got home from work tonight we reviewed a few of the homework problems and then I gave my son a shot at writing out 1/3 in binary. It was neat to watch him work through this problem, and so cool to see him smile at the analogy to 0.99999…. = 1 in binary at the end of the video. I think the fun of topics like this can draw kids into math while also providing lots of opportunities to build on their basic understanding of arithmetic and numbers.

Over the weekend we did a fun Family Math project about decimals in other bases:

As I was putting my younger son to bed last night he asked me about decimals in base 4.  I don’t know why – our previous conversation had been about how to play the golf game on the Wii – but something about the weekend talk had obviously stuck with him.

This morning we had some fun with a specific number – 0.111111….. (repeating forever).  What does this number equal in different bases?  It was a fun and unusual way to review decimals:

the Vi Hart video we reference at the end is here:

I returned from a work trip to London this week and started a new math chapter with my younger son – decimals.

One of the most interesting parts of home schooling over the last four years has been learning how to teach some basic math concepts.  Topics such as fractions and decimals are things that I hadn’t really given any thought to in 25 years, and obviously I had never taught either of these subjects previously.  There were definitely some false starts and mistakes the first time around with my older son, and I’m hoping to do a better job this time around.

The first step was talking about the usual base 10 representation of numbers and reminding the boys about how to represent numbers in binary.  We hadn’t talked about binary numbers in over a year, but it seemed as though they had some memory of the basic ideas:

The next step was reminding them about the binary adding machine.   Although the motivation for the project today was to write some fractions in binary, a quick reminder of some of the basic arithmetic rules in binary seemed like it would be a good idea.

Although I promised in the last video that the next step would be looking at 1/3 and 1/5 in binary, that wasn’t actually the next step.   First we needed to do a quick review of how to convert base 10 numbers to binary (and also how to multiply by 2 in binary).  We did this step with our snap cubes:

With all of this review out of the way, we moved on to writing down 1/3 in binary.  Both of the kids thought this was a really fun exercise.  I think they were really surprised to see that the same procedure that worked for integers also worked for fractions:

The last step was converting 1/5 to binary.  The only difference between 1/5 and 1/3 in binary is that the fractions you encounter in the conversion from base 10 are tiny bit more complicated.

After we finished up here, the boys spent a little time figuring out the representation for 1/7.  There’s a neat trick involving multiplying by 8 that helps you see that the representation is right, and they managed to eventually find that trick, too, which was fun.

Definitely a fun morning and hopefully a neat way to introduce decimals.