Yesterday we did a project inspired by the great podcast conversation between Steven Strogatz and Federico Ardila here:

This week on “The Joy of x,” hear mathematician @FedericoArdila explain the intricacy and beauty of combinatorics to @StevenStrogatz. Listen and subscribe here: https://t.co/mCFi0f8WIa

You can read the full transcript of the episode here:https://t.co/Zc2E4x8dZ7 pic.twitter.com/gEA6UtZOAH

That project is here:

Next we looked at the shape made by the permutations of the set (1, 2, 3). The way my son thinks through this problem shows why I love sharing ideas from math research to my kids.

To wrap up today we dove a little deeper into one of the ideas we talked about yesterday – in the permutations of the set (1, 2, 3, 4) is there a permutation that requires 4 or more flips to get back to the starting point of (1, 2, 3, 4)?

The permutahedron is a really neat shape to explore with kids, and hearing them talk about and think through the shape itself is incredibly fun.

This week I listened a great conversation between Steven Strogatz and Federico Ardila on the Joy of X podcast:

This week on “The Joy of x,” hear mathematician @FedericoArdila explain the intricacy and beauty of combinatorics to @StevenStrogatz. Listen and subscribe here: https://t.co/mCFi0f8WIa

You can read the full transcript of the episode here:https://t.co/Zc2E4x8dZ7 pic.twitter.com/gEA6UtZOAH

We have played with the shape a few times before – see these blog posts of you are interested in seeing other ways that kids can explore the shape:

Today we explored the and idea that Ardila discussed in the podcast – finding paths on the permutahedron.

We started by just reviewing what the shape is and what it represents:

Next we tried an easy example of finding a path on the permutahedron going from a random permutation back to the correct order:

For the last part of the project we tried a more complicated scramble of the cards and found that walking back to the unscrambled state would take a minimum of 3 steps:

I love playing with this shape with kids. It is a great way to get them talking about fairly advanced mathematical ideas and also allows them to see a really neat 3d shape that research mathematicians find interesting! 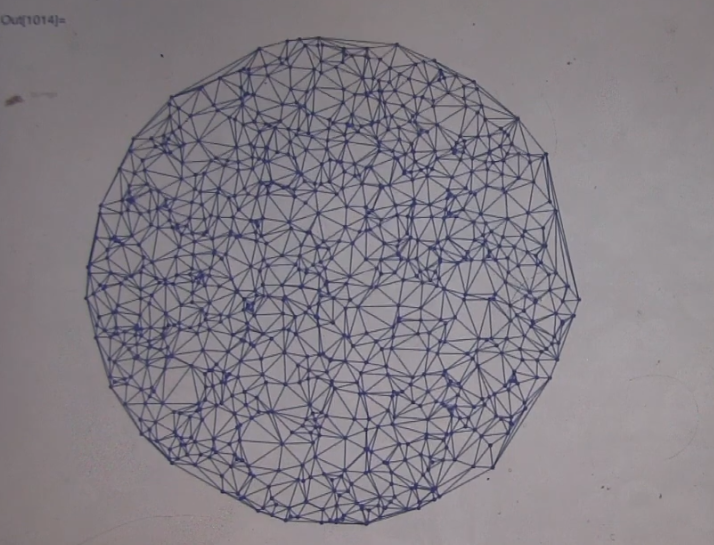 This week I watch an interesting live coding video from Stephen Wolfram:

Right at the beginning of this video Wolfram shows how to use some simple Mathematica commands to make a simple model of how a virus spreads through a network. I thought it would be fun to share this idea with the boys for several common networks.

I introduced the idea on a 2d grid:

Then we moved to a 3d grid:

Then we moved to a type of network called a Delaunay triangulation:

Now we moved away from these relatively simple graph networks and looked at a completely random one:

With these examples out of the way, we moved to two types of networks that more more commonly used to model a network of human interactions. The first was a Watts-Strogatz network:

Finally we looked at a Barabasi-Albert graph:

This was a really fun project and I was really excited to hear how the boys thought about the different types of networks. The math to properly describe what’s going on in these networks is over my head but I am really happy that Mathematica makes it so easy to explore.

Finally, the idea for looking at these 6 different graphs comes from Christopher Wolfram’s fantastic agent based modeling example. In that program he dives into these different networks much more deeply than we do here – this program is definitely worth checking out if you’ve not see it already:

Our schools have been closed for the last 10 days. During that time I’ve been taking a little break from having my older son work on problems and am having him read Steven Strogatz’s Infinite Powers instead.

For our project tonight I asked him to pick out three chapters that he’s liked so far to discuss. He chose chapters 2, 3, and 10. As a quick note before diving in to his thoughts on these chapters, he studied calculus last year so I was having him read Strogatz’s book for history and context rather than as an introduction to calculus.

Here’s what he had to say about Chapter 2 which is about Archimedes:

Here’s what he had to say about Chapter 3 which is about Galileo and Kepler:

Finally, here’s what he had to say about Chapter 10 which is about Fourier:

I think he’s gotten a lot out of Strogatz’s book, and I was really excited to learn that he thought Fourier’s work was interesting. Maybe the Who is Fourier book really is the next right step for him. 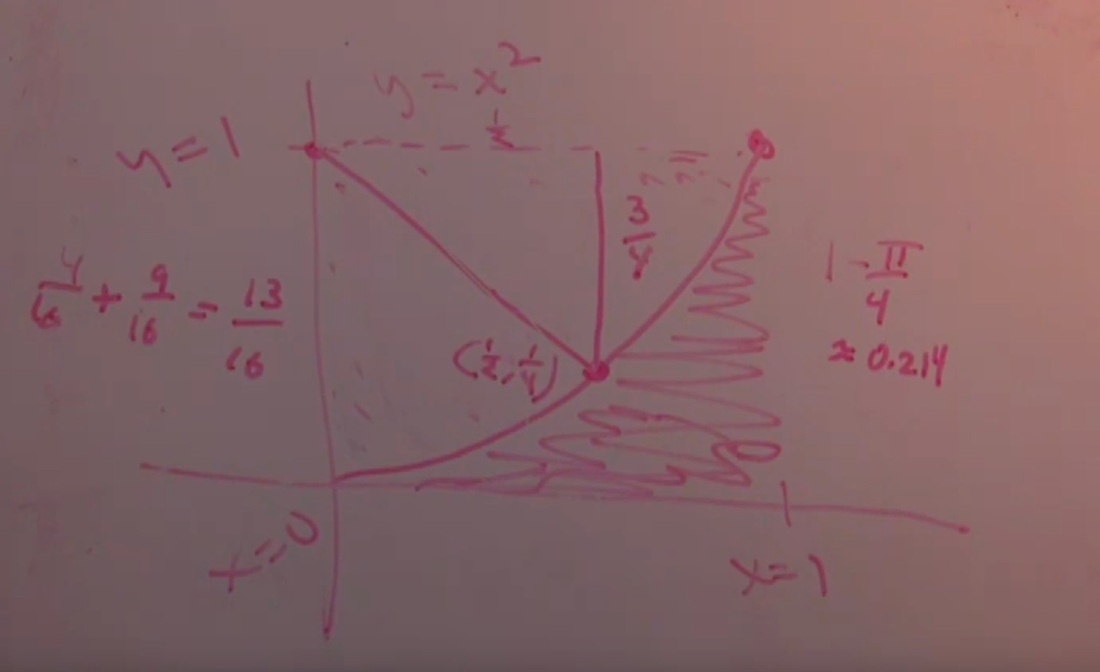 I had originally included two appendices in Infinite Powers, but they felt too mathy and got cut. Still, some of you might find them interesting. Here's a rough draft of appendix 1, about a clever way that Fermat integrated x^n with his bare hands [PDF]: https://t.co/gutuj0R38A

My older son and I did a fun project with Fermat’s idea. He’d taken calculus last year and the ideas Strogatz shared made for a really nice calculus review:

My younger son is in 8th grade and has not taken calculus. I thought some of the ideas about finding areas under simple curves would be interesting, so I tried sharing some of those ideas this morning.

for small values of

Now we moved on to the case

. He had the really neat idea of thinking that this piece of the parabola might be a quarter circle. That idea made for a great little exploration:

I asked for another idea had he decided to chop the parabola up into rectangles. This isn’t an idea that came out of the blue because we have talked about some intro calculus ideas before. I was still happy to have this idea jump to the front of his mind, though:

Finally, I shared the full Riemann sum calculation with him so that he could see how to arrive at the exact answer of 1/3. This part was not as much an exploration for him as it was just me showing him now to do the sum. I was ok with this approach as there is plenty of time after 8th grade to dive into the details of Riemann sums:

I’m very happy that Strogatz shared these unpublished appendixes. They are yet another great way for kids to see some introductory ideas from Calculus.

I had originally included two appendices in Infinite Powers, but they felt too mathy and got cut. Still, some of you might find them interesting. Here's a rough draft of appendix 1, about a clever way that Fermat integrated x^n with his bare hands [PDF]: https://t.co/gutuj0R38A

I read it and thought it would be terrific to share with my older son who took calculus last year. This year we’ve been working on Linear Algebra – so not a lot of polynomial calculations (yet!) – so I also thought Strogatz’s appendix would be a terrific review.

I had him read the note first and when he was ready to discuss it we began:

. Now we began calculating. He was able to write down the expression for the approximate area without too much difficulty:

The next step in working through the problem involved some work with a geometric series. Here my son was a little rusty, but I let him spend some time trying to get unstuck:

I just turned the camera off and on at the end of the last video and he continued to struggle with how to manipulate the geometric series into the form we wanted. After a few more minutes of struggle he found the idea, which was really nice to see.

Once he understood the simplification, the rest of Fermat’s proof was easy!

I’m having my older son read a few chapters of Steven Strogatz’s Infinite Powers this summer. We did a calculus course last school year so he has seen some of these calculus concepts before. I’m finding it both fun and fascinating to review some of the ideas with him – there were always lots of ways to review and freshen up the pre-calc ideas, but I still looking for good ways to do that with the ideas from calculus.

Anyway, think of this project as representing with a high school student with a year of calculus under his belt has to say about some of the main ideas from the course.

So, I had him read chapter 6 this morning – here are his initial thoughts:

I asked him to pick two ideas from chapter to talk about. The first idea he wanted to talk about was “instantaneous speed.” Here’s what he took away from the chapter:

The second thing he wanted to talk about was the “Usain Bolt” problem. This part of Strogatz’s book has received a lot of attention – here’s an article in Quanta Magazine, for example:

Here’s what my son had to say about the problem:

I’m always really interested to hear kids describe math concepts, but I’m not used to hearing kids talk through Calculus ideas. Hopefully we’ll have some fun over the next few years finding ways to review the main ideas. Probably Infinite Powers will be a great resource!

I got my copy of Steven Strogatz’s new book back in April:

My lol super power is being the last person in my twitter feed to read a book that was released today . . . @stevenstrogatz 🙂 pic.twitter.com/BriBlTwKx2

I’ve used it for two projects with my kids already:

Today my older son was back from camp and I thought it would be fun to try an experiment that is described in the first part of chapter 3 of the book. The experiment involves a ball rolling down a ramp and is based on an experiment of Galileo’s that Strogatz describes.

I started by having my son read the first part of chapter 3 and then tell me what he learned:

Now we took a shot at measuring the time it takes for the ball to roll down the ramp.

I misspoke in this video – we’ll be taking the measurement of the distance the ball travels after 1 second and then after 2 seconds. I’m not sure what made me think we needed to measure it at 4 seconds.

Anyway, here’s the set up and the 5 rolls we used to measure the distance after 1 second.

Here’s the measurement of the distance the ball rolled after 2 seconds. We were expecting the ratio of the distances to be 4 to 1. Unfortunately we found that the ratio was closer to 2 to 1.

This is definitely a fun experiment to try out with kids. Also a nice lesson that physics experiments can be pretty hard for math people to get right 🙂 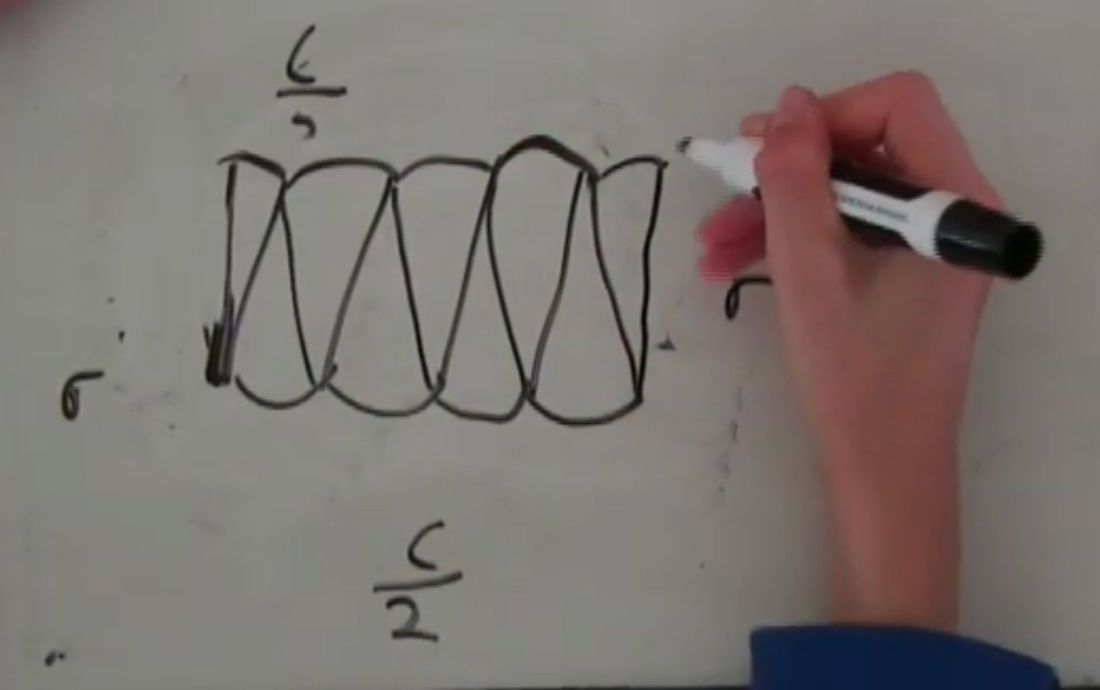 My copy of Steven Strogatz’s new book arrived a few weeks ago:

My lol super power is being the last person in my twitter feed to read a book that was released today . . . @stevenstrogatz 🙂 pic.twitter.com/BriBlTwKx2

The book is terrific and the math explanations are so accessible that I thought it would be fun to ask my younger son to read the first chapter and get his reactions.

Here’s what he thought and a short list if things that he found interesting:

Next up was the “riddle of the wall”:

Finally, we talked through a few of the Zeno’s Paradox examples discussed in chapter 1:

I think you can see in the video that Strogatz’s writing is both accessible and interesting to kids. I definitely think that many of the ideas in Infinite Powers will be fun for kids to explore!

Magnificent visualization of half a million points on the Lorenz attractor spreading into chaos (ht Red Giuliano, one of the students in my nonlinear dynamics and chaos class) https://t.co/k3oKHXvKHl via @YouTube

I thought it would be fun to share it with the boys and just listen to how the described what they saw.

Here’s what my younger son said when he saw the video: