Last week my younger son was working through a really neat problem from Art of Problem Solving Precalculus book:

Sharing this neat problem from AoPS’s Precalculus book again. It gave my younger son some difficulty last night but he eventually got it pic.twitter.com/VQjuN7S0wA

We actually did a project on it at the end of last week, but the video for the last part of that project got messed up in the camera memory, unfortunately. I’ll put the first two videos of the original project at the bottom of this post – the calculations that start this project are what was in the video that didn’t record properly.

So, to start today’s project by showing how to solve the original problem by doing calculations with complex numbers:

Since my older son saw the geometric connection in the last problem much more quickly than I thought he would, I had my younger son talk through the geometry here. At the end I asked the boys if they thought the geometric solution or the complex number solution was more illuminating:

Finally, off camera I asked the kids to come up with two similar problems that they thought would be fun to try to solve. They came up with two interesting ones that we played around with for about 20 min and then discussed what we found in the video below:

Definitely a fun project. The connection between trig functions and complex numbers is something that I think many kids would find fascinating. I love that that Art of Problem Solving took the time to illustrate this amazing connection!

Below are the two videos from the project with my younger son working through the original problem. I’m sad that them video with the final calculations didn’t record properly, but at least that part was mostly mechanical and easy enough to repeat. 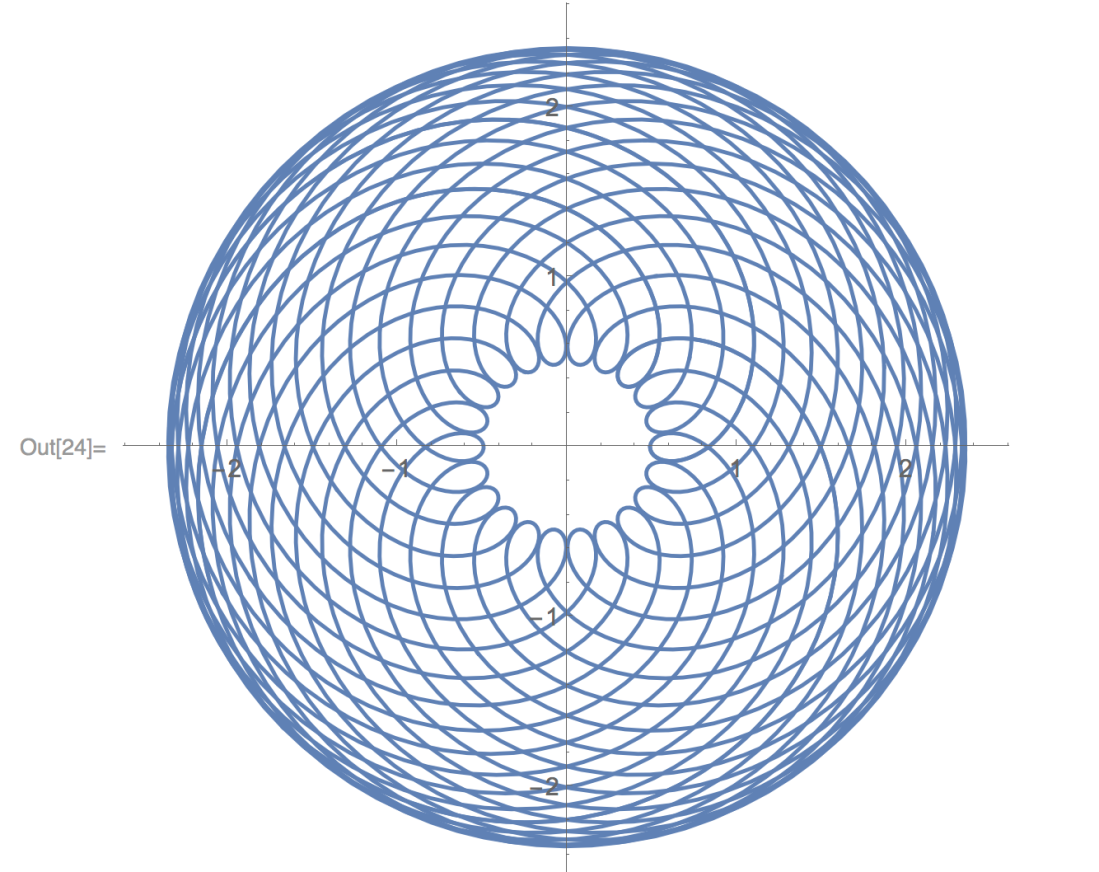 I saw another great tweet from Dillon Berger yesterday:

Visualizing the retrograde of Mars pic.twitter.com/mXSftu6i0M

After seeing it I thought that talking about the orbits of the Earth and Mars would make for a great project with the boys today. We started with some basic ideas and the kids actually had some ideas that related to Kepler’s Laws, which was super fun:

Next we moved to the computer to look at Berger’s tweet and see what he boys had to say about it:

Now we went back to the white board to talk about representing the orbits with polar coordinates. My younger son is just learning about polar coordinates now and I started the conversation here a bit too quickly, I think, but even with the bad start hopefully we had a productive conversation:

Finally, we went back to the computer to look at a simplified program illustrating what the orbit of Mars looks like when viewed from the Earth.

This project was really fun – I’m really grateful that people like Dillon Berger share so many amazing ideas about math and physics on twitter. All of that sharing makes finding fun projects to do with kids so much easier!

This week I’ve been doing a fun 3d printing project with my younger son who is learning trig (from Art of Problem Solving’s Prealgebra book). We have used 3d printing to explore 2d geometry before – see some of the projects here, for example:

Evelyn Lamb’s Pentagons are Everything!

This week I had my son create, code, and then print some simple 2d shapes – the project combines ideas from trig, geometry, and algebra.

Here’s the 2nd shape – a 7-6-3 triangle. Creating this shape shows how ideas from introductory trigonometry come into play:

Finally, here’s a regular pentagon that we made yesterday. Unfortunately we made a mistake in the code for the print – mixing up a Sin() and a Cos(), but here is explanation of how to make the shape is correct:

I’d forgotten how useful 3d printing can be as a tool to explore 2d geometry – this week was a happy reminder of how fun those activities can be!

My younger son is working through Art of Problem Solving’s Precalculus book this year. Today we were working through some problems in chapter 4 on right triangle trig. He had been working through this section on his own while I was traveling last week.

One of the problems struck me as one that would make a nice project – the problem gives two lengths of a triangle plus an angle and asks you to calculate the area.

Since the angle is 30 degrees, his solution to the problem did not really use trig:

Now I changed the angle to 40 degrees. My expectation was that this change would not produce a solution that was all that different – wow was I wrong.

This school year my younger son is working through Art of Problem Solving’s Precalculus book. This week we started chapter 4 -> Applications to Geometry. The first section is on right triangle trig.

Here’s the problem and how he got started:

Next he dove into the solution. His technique is to first draw a right triangle with a hypotenuse of 1 and then scale up:

Finally – here’s how he solved the equation he found in the last video (with some not so great calculator help from me . . . )

My younger son is studying trig right now and I thought it would be fun for him to play around with some 3d curves made with trig functions.

I showed him how to use Mathematica’s ParametricPlot3D[] function and then just let him make some shapes on his own. He settled on a curve that looked like this:

Here’s the code just in case it is not legible in the video:

After he made the curve we printed it – it was really fun to see him working on the print when it was finished. I wish the picture was better!

When everything was finished I asked him to tell me about the curve. I’d not seen the code before and didn’t know there was a stray Cos[x] in it. Talking about that piece of the code led to a great conversation about elementary trig functions (totally by accident!):

Finally, I had him talk about the 3d printed shape:

I really enjoyed this project today – it is fun to use 3d printing to explore so many different areas of math.

I’ve been looking forward to sharing two calculus ideas from Patrick Honner with my son for the last week. We were, unfortunately, a little rushed when we sat down and there are a couple of mistakes in the videos below. Even though things didn’t go perfectly, I really enjoyed talking through these ideas.

Here’s the first idea – a twist on integration by parts that Honner learned from the British mathematician Tim Gowers:

Thanks to Sir Timothy Gowers, I always preface integration by parts with "the method of successive approximation":https://t.co/B7iUYbGmjw

Here’s the second idea – a fun surprise when a student made a creative substitution in a integration problem:

I asked my BC Calculus students to integrate 1/(x² – 1) today. One of my students did this! I was blown away by her creative thinking.#math #mathchat #APCalc pic.twitter.com/sZGtPqxZ3j

So, I stared the project by talking about how to integrate arctangent without using integration by parts:

In the last video we found a possibly surprising connection between arctan(x) and ln(x). Here I introduced the integral from the 2nd Patrick Honner tweet above and showed my son how you solve that integral using partial fractions. The point here wasn’t so much the integral, but rather to show that ln(x) showed up in an integral similar to the one we looked at in the first part of the project:

How I showed the technique that Honner’s student used (though I goofed up the substitution, unfortunately, using u = ix rather than x = iu. By dumb luck, that mistake doesn’t completely derail the problem because it only introduces an incorrect minus sign):

Now that we’ve found two connections between arctan(x) and ln(x), we went to Mathematica to see if the two anti-derivatives were really the same. It turns out the are (!) and we got an even bigger surprise when we found that Mathematica uses the same technique that Patrick Honner’s student used 🙂

Also, in this video I find a new way to introduce a minus sign by reversing the endpoints of an integral . . . . .