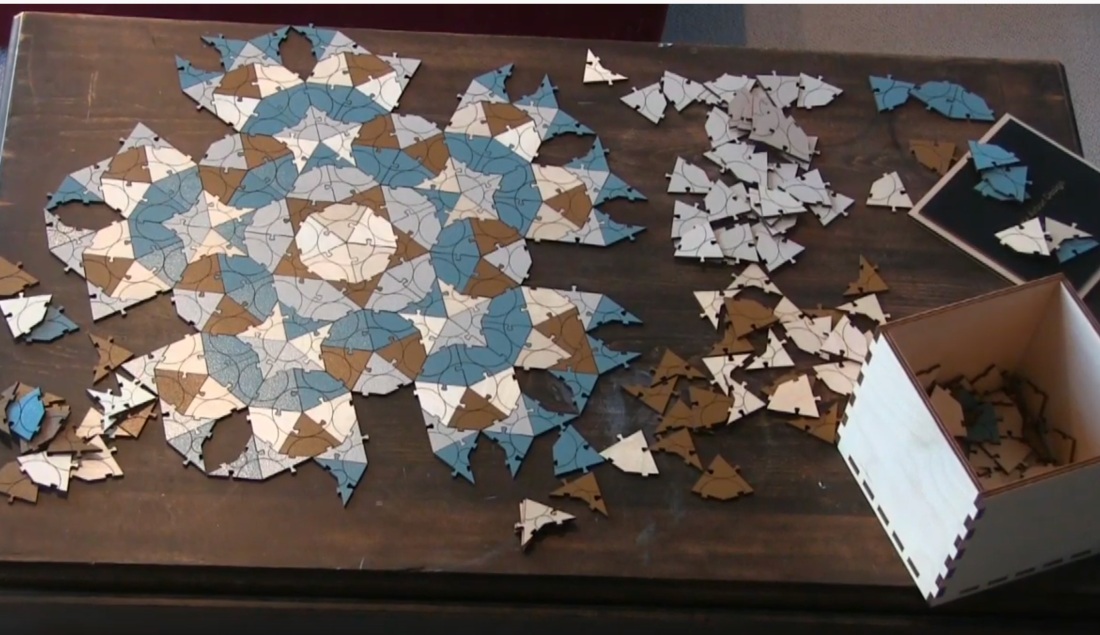 This week I’m going to share math projects based on items you can purchase from small businesses (in the US) who make amazing math-related products. The first project is based on the tiles from Cherry Arbor Design:

Please take a look at their site and their beautiful products.

My younger son chose to make a design using their Penrose tiles, which led to a great discussion:

My older son used their dragon tiles which let us talk about the symmetry he expected and then what he actually found:

Everything that Cherry Arbor Design makes is stunning. Check them out and consider supporting them if you can.

Yesterday we did a really fun project inspired by a tweet from Steven Strogatz:

Unusual intuitive argument for why A= pi r^2 for a circle, found by one of the tables in our #math exploration class. I love these surprises pic.twitter.com/dch9PfmynZ

During the 3rd part of our project yesterday the boys wondered how the triangle from Strogatz’s tweet would change if you had more pieces. They had a few ideas, but couldn’t really land on a final answer.

While we punted on the question yesterday, as I sort of daydreamed about it today I realized that it made a great project all by itself. Unlike the case of the pieces converging to the same rectangle, the triangle shape appears to converge to a “line” with an area of

, and a lot of the math that describes what’s going on is really neat. Also, since my kids always want to make Fawn Nguyen happy – some visual patterns make a surprise appearance 🙂

So, we started with a quick review of yesterday’s project:

The first thing we did was explore how we could arrange the pieces if we cut the circle into 4 pieces.

After that we looked for patterns. We found a few and my younger son found one (around 4:09) that I totally was not expecting – his pattern completely changed the direction of today’s project:

In this section of the project we explored the pattern that my son found as we move from step to step in our triangles. After understanding that pattern a bit more we found an answer to the question from yesterday about how the shape of the triangle changes as we add more pieces.

Both kids thought it was strange that the shape became very much like a line with a finite area.

The last thing that we did was investigate why the odd integers from 1 to N add up to be $late N^2$. My older son found an algebraic solution (which, just for time purposes I worked through for him) and then we talked about the usual geometric interpretation.

So, a great two day project with lots of fun twists and turns. So glad I saw Strogatz’s tweet on Friday!

We seem to always start our year off with a Fawn Nguyen-like problem. Today it happened by accident when I saw this visual pattern problem from John Golden:

This has been the stumper. What's the rule? #visualpatterns pic.twitter.com/RRSctu5kiM

We tried out the problem for a little after dinner math challenge tonight. Here’s what the boys thought initially – I was happy to see that they noticed that they could look at the pattern going backwards as well as forwards:

At the end of the last movie the boys wanted to make the base for the next tower. We did that with the camera off and then started looking at the pattern again.

I was a little surprised that they wanted to make this next piece rather than just talk about it, but making it did seem to help them see what the pattern was. In fact, their initial guess at the pattern was totally different from what I saw 🙂

So, although we didn’t get all the way to the formula for the nth step, we did find a way to determine (in theory) the number of blocks on any of the steps. I remember playing around with these difference tables in high school and being absolutely amazed – it is fun to be able to play around with them with the boys now.

This morning David Coffey asked (on twitter) for thoughts on a visual pattern problem:

Got this example of an assessment item for MP 8 from Jason Zimba at #NCTMAnnual. Thoughts? pic.twitter.com/SgZhtcdaqg

I didn’t like the problem that much. My main objection, I suppose, is that the first three choices are so easy to eliminate that a correct answer to this question isn’t that informative.

Not that multiple choice questions are going to be super informative anyway, but I suggestion a revision to make the question more like they type of question that Fawn Nguyen asks on her site visualpatterns.org

Tonight I had my younger son work through both questions. Here’s how it went:

Here is his work on the original question:

Here’s the work on the revised question:

Yesterday I found Patterns of the Universe at the MIT book store:

and did a little intro project with the boys last night:

Patterns of the Universe Part 1

This morning we went back to the book to have each of the boys look at a new pattern in more detail. Here’s what my younger son picked:

and here’s how he colored it in and some thoughts he had about the shape:

My older son picked the Harriss spiral – here are his initial thoughts. I was excited to hear that he wanted to learn more about this shape:

Here’s how he colored it in and also his description of the pattern – “it sort of reminds me of how a tree behaves”:

I’m really happy to have this book. It is a great way to get kids thinking (and talking) about both patterns and math that they might not be seeing in school. The process of coloring in the patterns gives them lots of time to think about the math, too, which hadn’t occurred to me before watching them work in their patterns this morning.

Was really excited to find this pile of books today!

Well well well, look what I just stumbled on pic.twitter.com/FzjG6DsuiQ

Tonight I gave each of my kids a copy and asked for their reactions. I also had my 4th grader color in one section to see what he would do (it wasn’t what I was expecting!). My older son had an 11 hour day at school because of a club he’s in, so I decided to wait until tomorrow for his coloring.

Here’s my younger son’s initial reaction to the book:

Here’s how he colored in the Sunflower and why he did it that way:

Here’s my older son’s reaction to the book:

We used our Zome Geometry book for another Family Math project today. The project we stumbled on used the blue struts to talk about volume and scaling. It starts by asking a seemingly simple question about the volume of two boxes you can make with the blue struts. Here’s the problem:

and the constructed boxes – I liked hearing their ideas about the volume of the larger box:

Next they re-built the “golden box” using only medium and short blue struts. Building the box this way gave them a little bit of extra insight into the volume. Their first guess about the volume was that it would be the same as a cube with side length equal to 2x the small blue struts.

Once we saw that the 2x2x2 cube was too large, the kids thought to build a cube out of the medium struts. It seems possible that these two structures have the same volume – but we need to find a relationship between the mediums and the small blue struts in order to calculate the volume.

While we had the camera off, the boys played with the medium and small struts to find an aproximate relationship. They used this approximation to estimate the volume of the golden box. It was really interesting to me to hear and see their approach here:

After we finished the project, my younger son was playing around with the struts a little more. I thought it would be fun to see if they could see the interesting relationship between the medium and small blue struts. We did a little postscript. Here they see the numbers 5, 8, 13 for the long struts and 3, 5, 8 for the short ones and guess that the next numbers will be 13 and 20.

We checked if 20 shorts matched 13 mediums and found a fun surprise!

So, a fun project with a surprise postscript. Who would have thought you’d see the Fibonacci numbers pop up just by building Zometool boxes 🙂