Three tweets over the last two days have had me thinking about linear and non-linear ideas that arise when students are learning math.

In the order I saw them:

I have never thought about rational exponents this way. Love it. From CME Project alg 2 textbook cc @bowenkerins pic.twitter.com/8dphuG6StT

(2) A student mistaking a non-linear idea in trig for a linear one:

(3) A second example of mistaking a non-linear process (functions / logarithms) for a linear one:

Something in the example in the first tweet left me uneasy and I couldn’t quite put my finger on what it was. Seeing the next two tweets, though, helped clear the fog – at least a little.

The first example takes a non-linear process – a geometric series – and uses it to illustrate how to understand a linear process – adding exponents. BUT, it is maybe a little surprising, especially to students, that the linear / non-linear relationship works so nicely in this situation. As the next two examples from students show, a non-linear idea doesn’t always simplify so easily. I worry that the first example subtly plants the idea that everything is linear and could lead to the type of misconceptions illustrated in the 2nd two tweets.

Still trying to think through all of this, though.

I learned about a new game called “The Witness” from this Vi Hart tweet last week:

After seeing a few reviews and the game trailer, I thought I’d give it a try:

The game is really fun if you like solving puzzles, but the pleasant surprise about this game is how fun in is to play with kids. So far none of the puzzles are so hard that kids can’t solve them, though figuring out how to solve to solve each particular one is far from obvious!

I think another Vi Hart tweet has the best description of the game:

Here’s a little pic from our first time playing 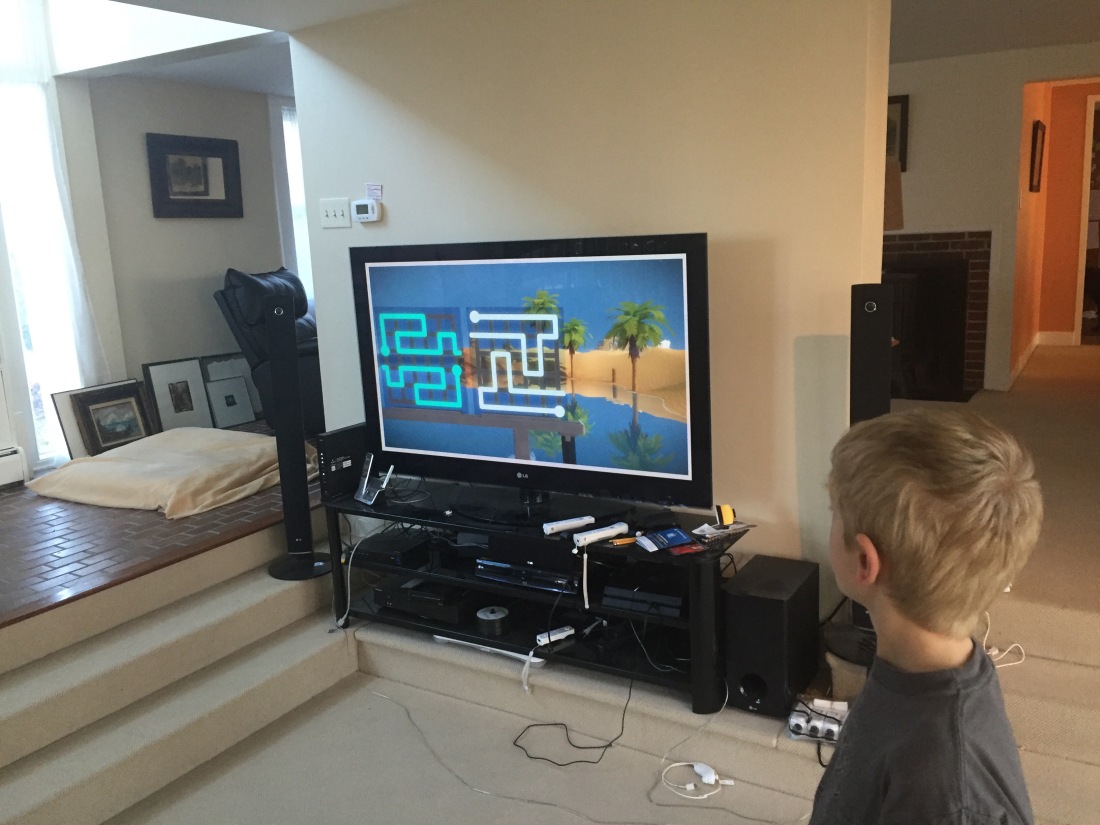 and a video of my son solving one of the puzzles – which probably doesn’t give you the exact right impression of the game, but it is better than nothing:

and when my son was sick this morning we sat on the couch together trying to draw the right solution to some puzzles we were seeing (essentially) in a mirror.

The kids love the open-endedness of the game – so if we can’t figure out how to solve all of the puzzles in one section we can just go somewhere else. My younger son called this a “sandbox game” which is a term I’ve not heard before – but he says the ability to go to other places is just like playing in a sandbox. The also love the challenge of solving the puzzles.

Anyway, with all of the hype around the release of the game last week, I just wanted to say that if you are looking for a mathy game to play with kids, this game is for you!