We know way more about how to teach multiplication and fractions then how to teach complex numbers or functions.

Made me want to share my attempt to talk about complex numbers with my older son earlier this year.   Up until this discussion all we had really covered was basic definitions of complex numbers – hardly anything more than that

.  This series of discussion was motivated by my son asking me why the cube root of 343 had 7 as the only solution, but something like the square root of 9 had two solutions -> +3 and -3.

As with just about everything I do with my kids, this was all on the fly (except some details in the last talk).   I’m sure there are mistakes, but here’s what we did:

The first step was just talking about the question he’d posed:

.  I probably should have started with this equation in retrospect.  The important step in this problem was looking at where two sets of roots we’ve found appear in the complex plane:

The next step was a detailed look at the geometry that we had looked at in the last video.  The focus here is the three solutions to

.  In particular, the three solutions look like they lie on our unit circle – do they?  The next thing would be to see if they do actually form an equilateral triangle.  Not sure why I skipped this second part:

The next thing we did was to circle back to the original question.  We had used a combination of factoring and the quadratic formula to find the solution to

, but we never bothered to check that all three of the numbers we found were actually solutions.  Here we crunch through that math just to get some experience calculating with complex numbers:

I wanted to end the series talking about a neat result – the fundamental theorem of algebra.  It was tricky to figure out how to cover this topic with a young kid, but I wanted to give it a shot.  Obviously I don’t get into any details of Gauss’s proof, but I’m always happy to talk about important math results.  This particular topic was actually more fun than usual since, to my son, Gauss is famous for adding up 1 + 2 + 3 + . . .  + 100 – and nothing else!! Ha ha:

I definitely enjoyed throwing this little sequence together.  Even though there was no direct follow up, every now and then I think it is fun to show my kids more advanced ideas that use some of the basic math we are covering.  Probably my favorite example along those lines – and one that turns out to be pretty closely connected to the sequence here – was a talk about regular pentagons.  A little longer than usual, but one of my favorite examples of how some basic math comes together for a neat result:

Sometime last year my kids became fascinated by Rubik’s cubes.  Not sure why or how it happened, but once they started playing around a little they were hooked.  So much so that learning more about how to solve the cubes seemed like a fun topic to include as part of the school year, so we’ve been studying some of the 2×2 and 3×3 speed solving techniques for fun since September.   Even though I’m not practicing the speed solving with the boys, I’ve gotten a little hooked, too 🙂

Following a few folks on twitter also led to some interesting Rubik’s cube related reading in the last year.  Christopher D. Long (@octonion) tweeted about the book “Adventures in Group Theory:  Rubik’s Cube, Merlin’s Machine & Other Mathematical Toys.”  Definitely a fun read if you are into math, though it’ll be a while before I can pull much from it for the boys.

This comment really struck me  – “I have never been particularly fast at working out the details of something from the conceptual understanding (for example, it takes me a long time to solve a 7x7x7 Rubik’s cube) but it turns out the Rubik’s cube doesn’t mind. And in fact mathematics in real life isn’t a timed tests- the idea that you need to be original and creative really quickly is just a silly, arbitrary way to select for talent.”  (as an aside, you should definitely follow her blog and follow her on twitter – you’ll not find a more interesting blog.)  I agree with Cathy O’Neil’s point that there’s not anything special about solving the cubes fast.  The kids seem to like it and enjoy learning the techniques, but it is mostly just a matter of practice.  That said, the world record solve times (~5.5 seconds for solving the 3×3, for example) really are  mind blowing.

So, what can kids learn from these cubes?

There is quite a bit of interesting math related to the cube solving algorithms (see the book mentioned above).  A simple introduction to these algorithms probably has some benefit, but I’m aiming a little lower right now.

One interesting advanced topic is parity.  This position on the 3x3x3 is impossible to solve:

You can not create a position with just one middle reversed with legal moves.  In order to make this postion, you have to take the cube apart.

However, this position on the 4x4x4 cube, which seems pretty similar to the picture above, is solvable: 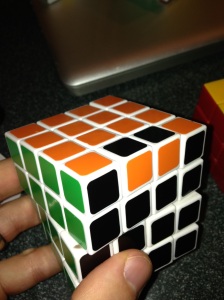 At least for my (very, very very slow) solving technique, figuring out how to solve the 4x4x4 from this position was the final obstacle to overcome in learning how to solve the larger cubes.

For my younger son, it turned out that the cubes were also fun tools for learning about topics like fractions:

It isn’t hard to believe that kids will be more excited about learning when they are having fun, but it great to see that excitement in practice.    Of course, it has also been really fun for me to use the Rubik’s cubes to help teach a bunch of different math topics.  Maybe one day we’ll even be able to replicate something like this 🙂

About two weeks ago my son asked me a fun question about cube roots.  We’d spent a lot of time studying quadratic equations over the last couple of months, but for some reason he was looking at cube roots rather than square roots this morning (I don’t remember why).  The problem he was working on required him to find the cube root of 343.  He asked me why there was only one solution here but square roots had two solutions.

I’d been looking for something to talk about over Christmas break anyway, and this random little question definitely was ready made for a week of talks.  We spent a total of seven days discussing quadratics and cubics and had a lot of fun.

(1) The first day we spent some time playing around on Mathematica looking at the difference between graphs of quadratic equations and graphs of cubic equations  (with real coefficients).  After doing that, we talked about what we saw:

(2) The next day we went back to look at a little algebra.  The algebra book we are studying (Art of Problem Solving’s “Algebra”) had sections on differences of squares and  differences of cubes.  We’d spent so much time away from cubes, though, that I didn’t expect that my son remembered much about differences of cubes.  We revisited that topic in this video and show how we can use the quadratic formula to help us find all of the roots of an equation that is a difference of cubes:

(3) In the last video we found the three roots of the equation x^3 = 1.  In this video I tried to show a little bit of geometry behind these numbers.  I wanted to do talk through some of the geometry before doing a bit more arithmetic with the imaginary numbers.   We also ended up spending a lot of time in this video talking about the equation x^4 = 1.

(4) Here we dig into the geometry of the solutions of x^3 = 1 a little more.  In particular, we check that the three solutions all lie on a circle of radius 1 in the imaginary plane.

(5) Next up, we finally get around to checking whether or not the three solutions we found to x^3 = 1 are actually solutions.  So, this video is a little bit of arithmetic on complex numbers.

(6) Having now gone through quite a bit of algebra, geometry, and arithmetic, I wanted to spend a little time on history.  The point was to give a little context to the question my son asked and explain that polynomials with degree “n” have n solutions.  The fact that we find two solutions for quadratics and three solutions for cubics was just a special case of a more general fact.

(7) I didn’t feel like we should end on the fundamental theorem of algebra, so we did one more little talk.  In this one we talk through the history of finding solutions to polynomials.  We start with the quadratic equation and end with Galois.

All in all, this was a fun way to spend time on Christmas break.  Happy that my son asked me about cube roots last week!