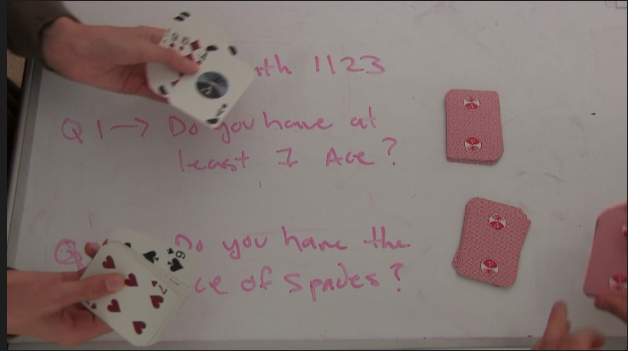 This week my younger son told me he wanted to learn a bit more about statistics. By lucky coincidence I happened to stumble on one of our old projects while trying to answer a question on twitter:

This project was about a fun probability problem I learned in this tweet from Jon Cook:

I stared by introducing the problem to my son and asked what he thought the answer was going to be:

Then we started in on the calculations. Finding the probability that someone having “at least one ace” had more than one was a little challenging, but we found the right approach after a few tries:

Next up was calculating the probability that someone who had the ace of spades would have a second ace. After the work we did in the last part, this calculation was easier:

Finally, we went to the Futility Closet page to see the numbers and then I asked my son why he thought the surprising result was true.

Definitely a fun project and a neat probability surprise for kids to see.