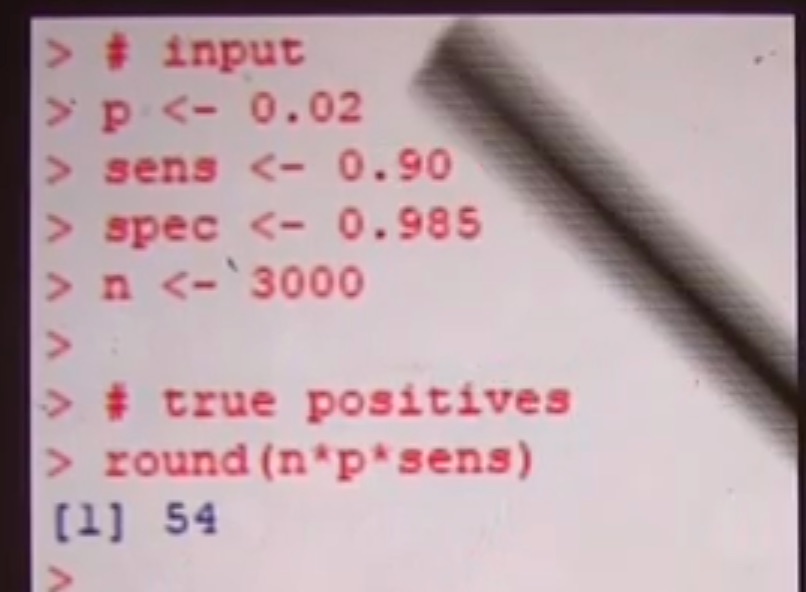 Last week I saw a terrific twitter thread from Natalie Dean, who is an assistant professor of biostatistics at the University of Florida:

A toy example of why test sensitivity and specificity matter in serosurveys.

Imagine population seroprevalence is 4%. Test sensitivity is 80%. Specificity is 99.9%. For a random sample of 3000 participants, you would expect ~100 positives, 3% of which will be false positives. pic.twitter.com/TMyCZGNXkq

Today I used the ideas in Dean’s tweets for a project with my kids. We started by taking a close look at the first example to make sure that we understood all of the concepts and calculations:

Having talked through the concepts in the first example we were now able to take a detailed look at Dean’s second example. This example is really helpful in understanding why sensitivity and specificity are such important ideas:

Now I asked the boys what they thought we could learn from these two examples. Then we looked at Dean’s conclusions:

Finally, I asked the boys to create an example that was similar to Dean’s example – so similar numbers of positives in the test, but with different percentages of the population having the disease. They spent about 10 min playing around in Mathematica and found a good one. Here they talk through what they found (sorry about the tilt in the camera – not sure what happened!):

When I saw Dean’s twitter thread, my hope was that the ideas would be accessible to kids. I think both of my kids were able to learn some important ideas from Dean’s twitter thread, so I’m extremely grateful that she’s taking the time to make these ideas accessible to the public. Definitely follow her to keep up with the latest ideas and research about the corona virus.