A tweet last week from John Baez made for a really fun week of playing around. I’ve written several blog posts about it already. Here’s the summary to date, I guess:

Watch animations of "juggling roots". As you change the coefficients of a polynomial, its roots move in fun ways: https://t.co/iGXCtAcrhO pic.twitter.com/hXYXN3ePDy

Today I got one step closer to a long-term goal

(3) A video from a comment on one of the posts from Allen Knutson that helped me understand what was going on a bit better:

So, with that as background, what follows are some final (for now at least) thoughts on what I learned this week. One thing for sure is that I got to see some absolutely beautiful math:

Playing with the "juggling roots" and printing some of the structures has been the most fun I've had with math in ages. #math #mathchat pic.twitter.com/4cL583Ix2y

Dan Anderson made some pretty neat 3d prints, too:

. I picked this polynomial because it is an example (from Mike Artin’s Algebra book) of a polynomial with roots that cannot be solved.

So, what do all these posts about “juggling roots” mean anyway?

Hopefully a picture will be worth 1,000 words: 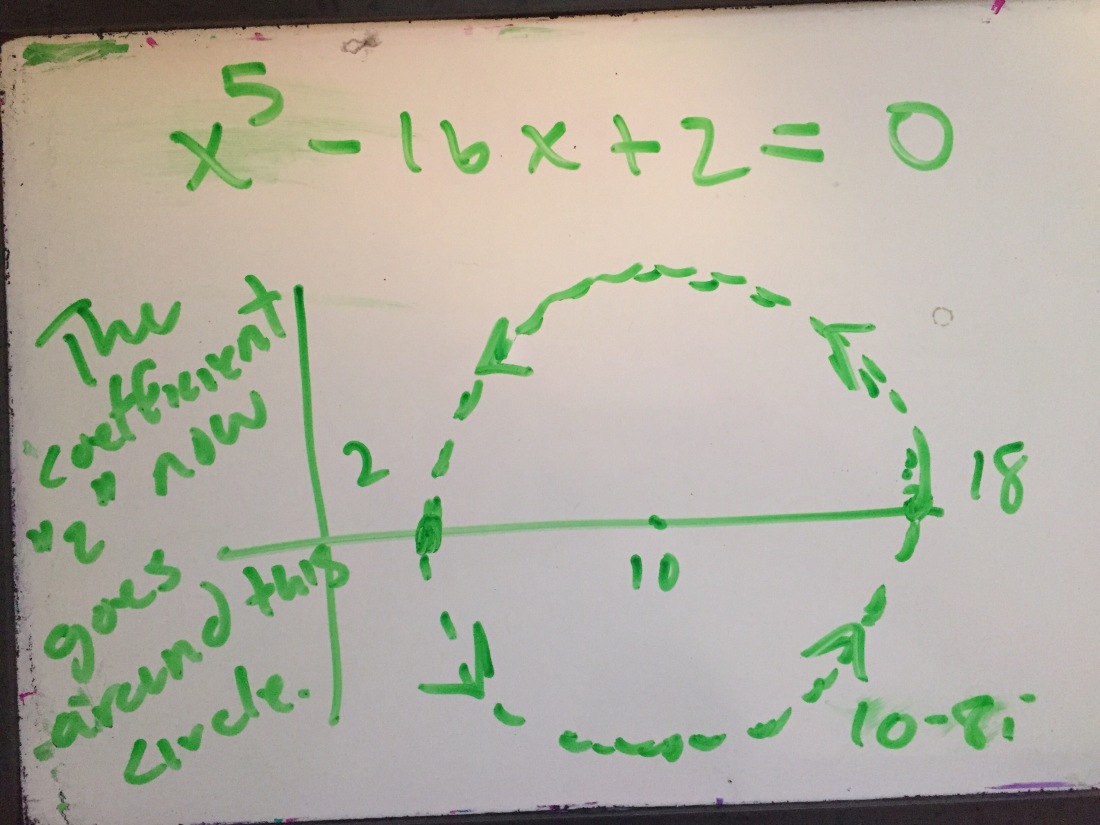 What we are going to do with our polynomial

is vary the coefficients and see how the roots change. In particular, all of my examples below vary one coefficient in a circle in the complex plane. So, as the picture above indicates, we’ll look at all of the polynomials

moves around a circle with radius 8 centered at 10 + 0 I in the complex plane. So, one of our polynomials will be

Here’s another example I found yesterday and used for a 3d print. Again for this one I’m varying the “2” coefficient. In this case the circle has a radius of 102:

When I viewed this video today, I realized that it wasn’t clear if 3 or 4 roots were changing places in one loop around the circle. It is 4 – here is a zoom in on the part that is tricky to see:

Next up is changing the “-16” in the x coefficient in our polynomial. Here the loop in the complex plane is a circle of radius 26:

term that is initially 0. In this case I’m looping around a circle in the complex plane with radius 20 and passing through the point 0 + 0i:

So – some things I learned over this week:

(1) That the roots of a polynomial can somehow switch places with each other as you vary the values of the coefficients in a loop is incredible to me.

(2) The idea of thinking of these pictures as slices of a 3-dimensional space (which I saw on John Baez’s blog) led to some of the most visually striking 3d prints that I’ve ever made. The math here is truly beautiful.

(3) I finally have a way to give high school students a peek at a quite surprising fact in math -> 5th degree polynomials have no general solution.

What a fun week this has been!