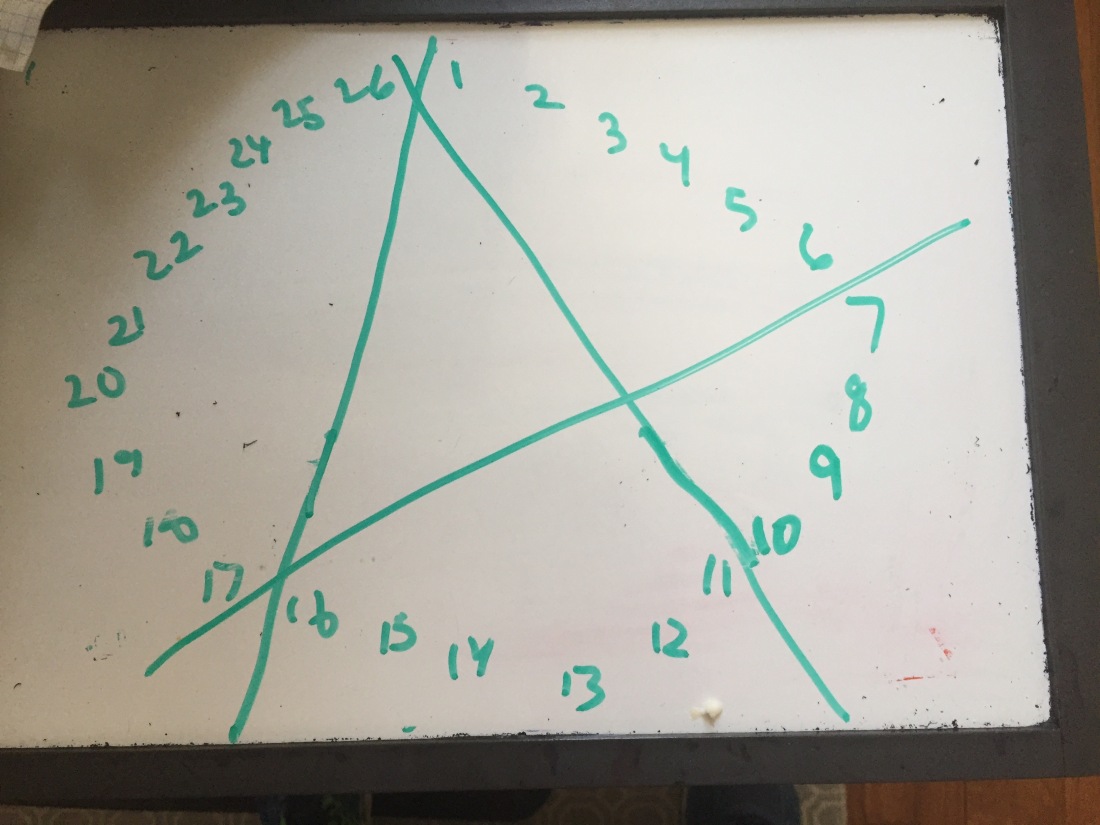 Last night a friend asked me a fun question about Snapchat:

“Say [our group]] has 26 people in it, but Snapchat has a limit of 16 in a group. How many groups would need to be created so that everyone is in a group with all of the [people in the original group]?”

It was fun to think this one through.

My thought process solving the problem went like this: 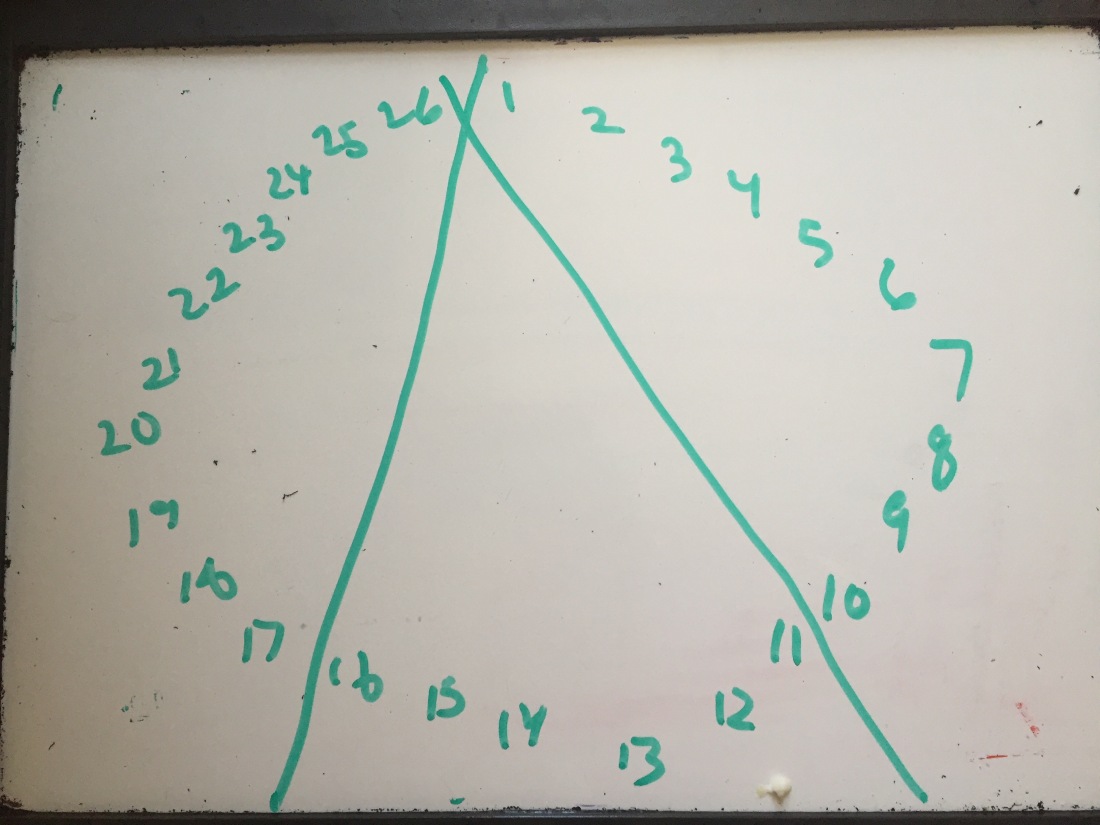 At this point I thought that since two groups of 16 had an overlap of 6 people you would need 5 sets of two groups to be sure that all everyone matched with everyone else. The reason, I thought, that you couldn’t do it with fewer was that 4 groups x 6 people = 24 and you needed to get to 26.

Yay – with a little thought I’ve cut the number of groups from 10 to 5.

But can you go lower than 5?

So, the same two starting groups as before, but now my 3rd group paired people 1 through 6 with people 17 through 26. Now only people 7 through 10 were not paired with everyone and it only required a final group of 14 to pair them with people 17 – 26. Those 4 groups paired all 26 people in the big group with everyone else.

With 26 people you are going to have to make a total of 26*25 / 2 = 325 connections if you want to pair everyone with everyone else. That’s because each person needs 25 connections, but each connection pairs two people (so, I don’t need to connect A to B and then later also connect B to A – that’s why you can divide by 2 in the formula above).

But you need 325 to have everyone connected with everyone, you can’t get there with three groups. So, 4 is the minimum and the method shown starting with the 3rd picture above shows one way to do it with 4. There are probably many others. 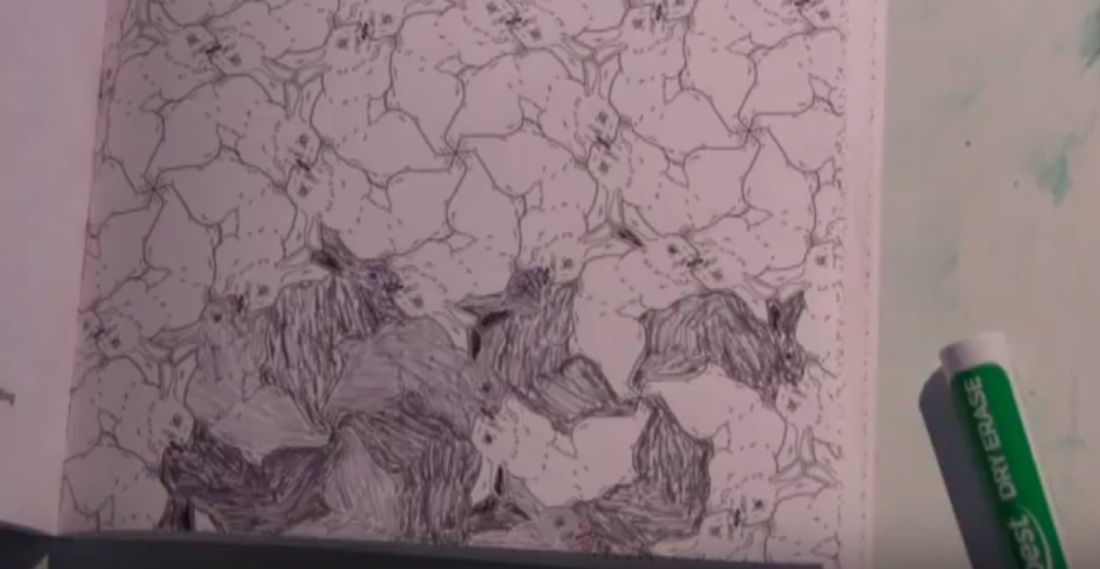 As we searched for our old patty paper supply yesterday I ran across our copies of Patterns of the Universe:

We’ve done a few projects with the book before:

Fibonacci, Zome, and Patterns of the Universe

Patterns of the Universe Part 2

I thought doing some mathematical coloring would make for a great project today.

My older son talked about his coloring project first – he chose a section of the book on a random walk dice game. It was fun to hear his thoughts on random walks (and walks constrained like the one in this activity). By coincidence Kelsey Houston-Edwards recently did a video on random walks, so there’s a really nice way to continue the discussion we had here.

My younger son chose a section on “snug bunnies” – a picture of bunnies tiling the plane. He picked this section because he likes tesslations. It was fun to hear him talk about his coloring pattern. At the end we took a look at some Penrose tiles just to extend the tiling idea.

I really enjoyed the project today – the seemingly simple act of coloring led to some really fun discussions and also gave me some ideas for fun follow up projects.