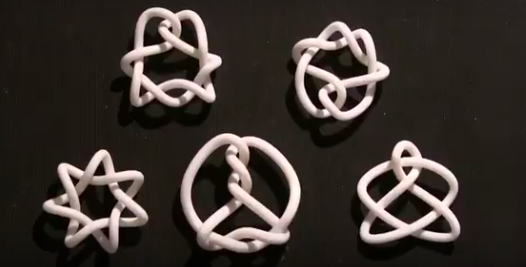 Yesterday I learned that Mathematica has a wide variety of knots that you can 3d print. We’ve done a few knot projects in the past. Here are 3 of them:

Playing with some 3d printed knots

I thought that actually being able to hold the printed versions of so many different knots in your hand was going to be a game changer for knot projects, though. So, I printed a few as test cases and had the boys look at them.

My younger son went next – he had a couple of things to say, but wanted to point out some of the knots in Colin Adams’s book, so we cut this video a little short so that we could go find the book:

After finding the book we were trying to match one of the printed knots with the knot in the book that he had wanted to print. The knot he wanted to print had 8 crossings and the one that we thought matched it turned out to have 7. Whoops – we had the wrong knot 🙂 A good accidental lesson that comparing two knots isn’t super easy!

I’m really looking forward to trying more projects with these prints. There are a little over 30 different knots with 8 or fewer crossings. It’ll probably take a week to print them all, but that’ll be a fun collection to have for future knot projects!