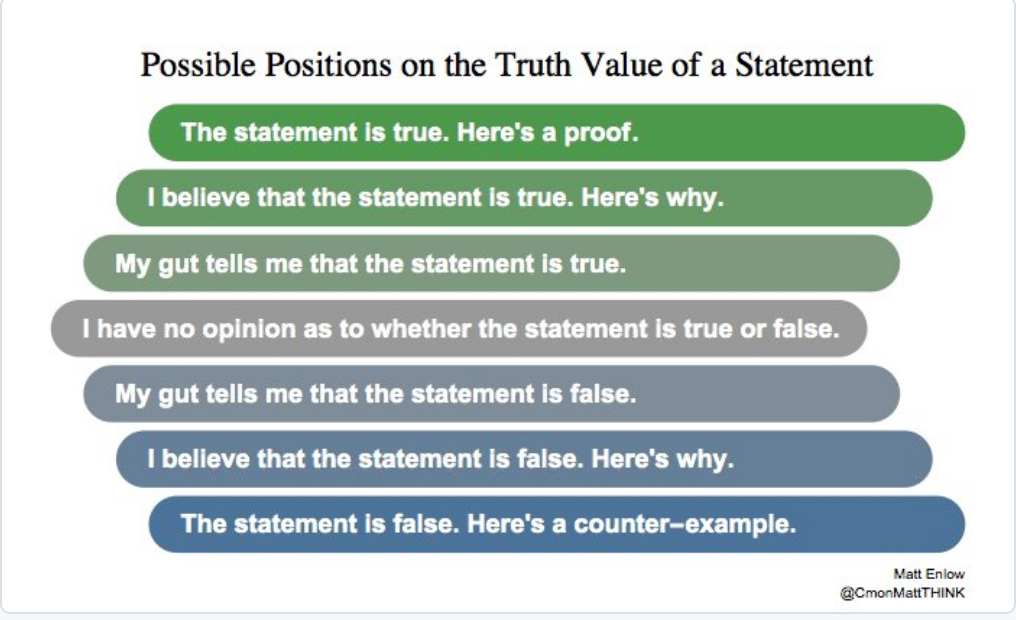 Dreamt this up yesterday to share with my #DAoM students. I imagine something similar already exists… Anyone know? pic.twitter.com/VERMZ45f8H

I thought it would be fun to talk through the list with each of my kids and ask the for examples of each on of the statements. My younger son was home this afternoon so he went first:

He said that he knew how to prove that the square root of 2 is irrational, and got most of the way through the proof!

(2) I believe the statement is true, here’s why

For this one he picked the Collatz Conjecture:

(3) My gut tells me that this is true

He picked some of the infinite series stuff we’ve been talking about lately!! I couldn’t believe that this was his example for something that he thought was true – yay1!

Here he picked the question about whether or not the number of twin primes is infinite.

(5) My gut tells me the statement is false

He had a hard time with this and I ended up breaking the video into two pieces because once he came up with a question relating to the Gosper Island, I had to go get them!

What his gut tells him is false is that the perimeter of the Gosper island is finite.

(6) I believe the statement is false – here’s why

He does not believe that you can make all of the integers using just 4 fours, and he has a nice reason.

(7) The statement is false – here is a counter example.

He didn’t quite understand the statement, but still came up neat idea. He made the statement “you can’t express all integers using binary” and (sort of) showed why that statement is false.

So, a really fun project – I’d love to see lots and lots of kids come up with examples for each of Matt’s 7 statements. Yesterday Vi Hart tweeted about an amazing program you can use to explore hyperbolic space:

The program, which (I think) came from joint work by Andrea Hawksley, Vi Hart, Henry Segerman, and Mike Stay, is here:

A program to explore hyperbolic space

The youtube video in Hart’s tweet shows her playing with the program and explaining a little bit about the different shapes you see. After watching that video I thought it would be fun for the boys to explore the program without any explanation of what was going on. I was really interested to see how a kid would react to seeing this 3 dimensional hyperbolic geometry for the first time.

Here’s what my older son had to say:

and here’s what my younger son had to say:

This is such a fun program to let kids play with. The boys noticed many strange properties of hyperbolic space without knowing they were looking at a strange new space. It really is amazing to have resources like this right at your fingertips!