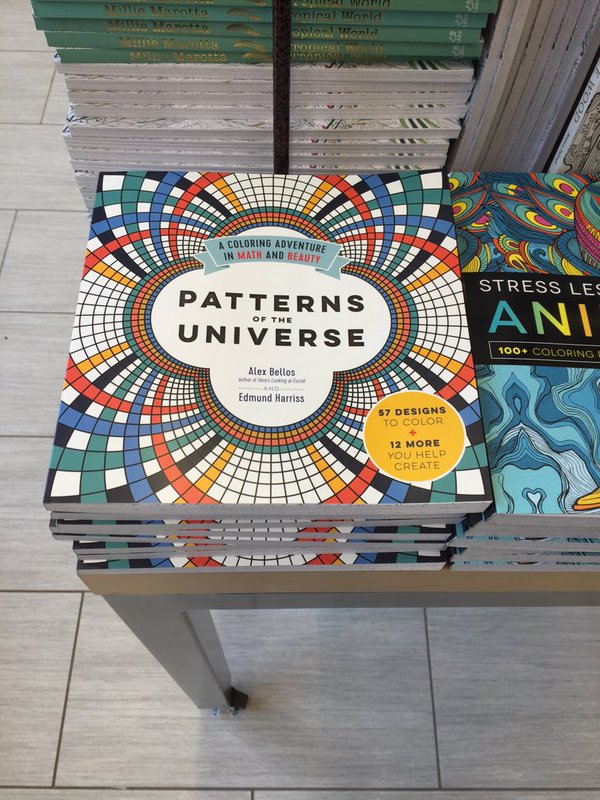 Was really excited to find this pile of books today!

Well well well, look what I just stumbled on pic.twitter.com/FzjG6DsuiQ

Tonight I gave each of my kids a copy and asked for their reactions. I also had my 4th grader color in one section to see what he would do (it wasn’t what I was expecting!). My older son had an 11 hour day at school because of a club he’s in, so I decided to wait until tomorrow for his coloring.

Here’s my younger son’s initial reaction to the book:

Here’s how he colored in the Sunflower and why he did it that way:

Here’s my older son’s reaction to the book:

Yesterday I wrote about a problem that Mary Bourassa posted on twitter:

Actually, she wrote about it, too!

My 3rd blog post today (!) – this one came from trying to solve this triangle. https://t.co/11js3ZxTqq #thanksall pic.twitter.com/D7SqrmOtW5

I found this problem interesting for a variety of reasons:

(i) It is a nice way to review the law of sines and cosines,
(ii) The relationship between the two triangles that arise in the problem is pretty neat, and gives a nice introduction to the extended law of sines, and
(iii) It shows the importance of checking your work!

Seems like a really nice way to get a good conversation going with a trig class.

Colleague made this in a conversation about completing the square and the utility of the quadratic formula. https://t.co/xWBzuRSipK

I’m less sure what to make of this problem. At first I thought maybe it would be interesting to talk about why the parabola and the circle cross the axis in the same spot, but I’m not confident that would be all that interesting. Maybe I’m missing the point, but I don’t see the connection between the circle and the parabola as something that’s going to grab the attention of students.

It made me wonder why I found the first problem more interesting than the second one. Personal taste? Missing the point of the 2nd one? Something else?

In a way both problems are fairly arbitrary – a triangle with essentially random sides and angles, and a pretty random parabola and circle.

Also, what would probably seem to students like a minor change to the 2nd problem – changing it to $y^2 = x^3 + ax + b$ lands you in the field of elliptic curves, which is one of the most interesting fields of math today. So, again, I don’t think the arbitrary nature of the problem is why it didn’t grab me.

Anyway, if I was going to talk about circles and parabolas, I think the problem illustrated on the cover of this book is a fascinating one, and would probably make a neat Desmos activity, too:

The problem goes like this – draw a circle whose diameter is formed by connecting the points (0,1) and (a,b). Now graph the quadratic equation

. What’s going on? (probably best to start with

but you could leave that open ended I suppose).