Answer to: What math thing made you sit down and go whoa? https://t.co/fJiRnw2xz4 This is the power of 1 teacher. pic.twitter.com/IWwDRgG3HL

led to a post about some of the fun math I saw in high school:

Math that made you go whoa!

I’ve had my mind on the topic for the last week and wanted to write about three ideas that blew me away in college.

I couldn’t believe the power and simplicity of the residue theorem. Integrals that seemed to be impossible could be evaluated almost effortlessly. One, in particular was stunning to me: 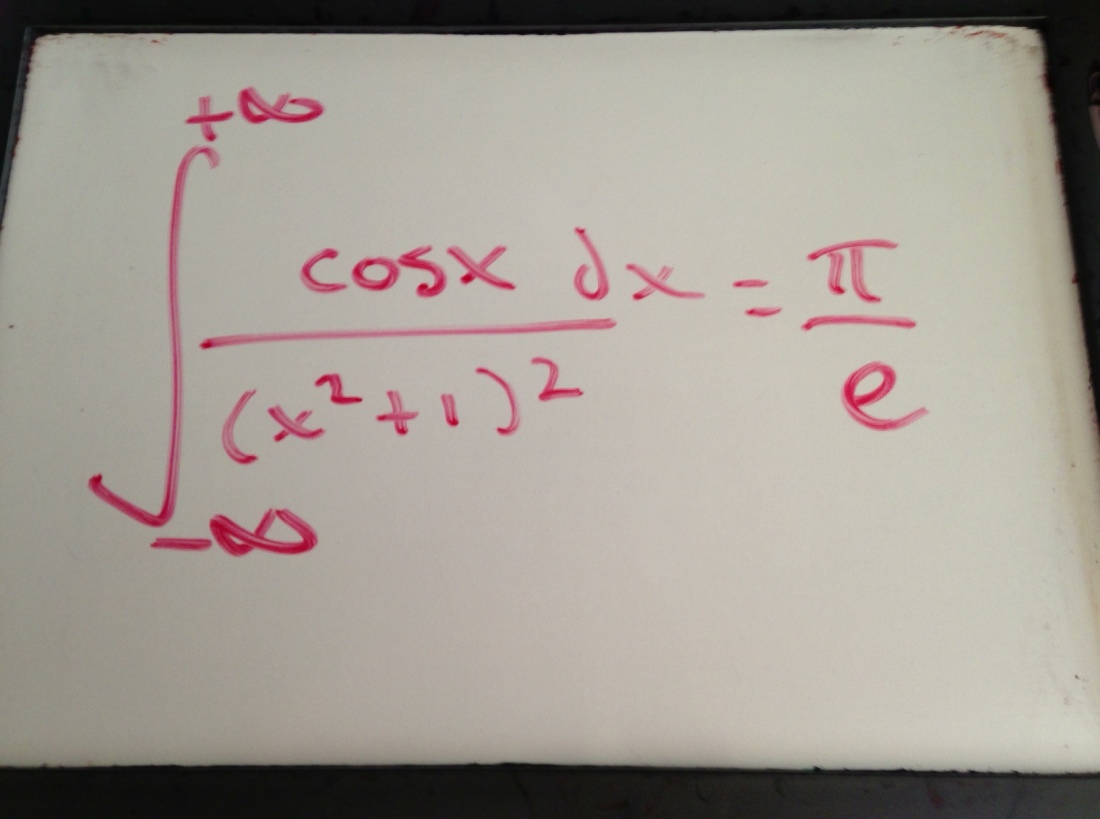 After seeing that example, I had no choice but to major in math!

I took a combinatorics class from Jim Propp (whose amazing blog Mathenchant is worth hours of your time!). Near the end of the class we came to a section in the book on Polya’s theory of counting.

I had never seen anything remotely like Polya’s theory of counting before. We surely just scratched the surface, but using only simple ideas from group theory you could count things that seemed impossible to count. As with the applications of the residue theorem above, these seemingly impossible counting problems suddenly became almost effortless.

One of the most surprising things to me about this theory was that many of the counting problems reduced to evaluating simple polynomials. For example, if you want to know the number of different ways to color the faces of a cube with n colors (where two colorings that can be rotated to be the same are considered the same), just plug n into the polynomial (

/ 24. The four terms of the polynomial come from the four different rotational symmetries of the cube.

Even writing this now I’m stunned at the power that these simple ideas from group theory had when applied to counting. Makes me wish I’d studied more combinatorics!

Mr. Waterman showed us many different math ideas in high school including the general solutions for cubic and quartic equations. So, before going to college I knew that 5th degree equations had no general solution, but I didn’t know why.

That secret was finally revealed in the last section in Mike Artin’s year long course in abstract algebra. It took some work to get there, obviously, but Artin showed us two reasonably easy to state ideas:

be an irreducible polynomial of degree 5 over a subfield

of the complex numbers, whose Galois group G is either the alternating group

or the symmetric group

. Then the roots of

are not solvable over

be an irreducible polynomial of degree 5 over the rational numbers. If

has exactly three real roots, its Galois group G is the symmetric group

, and hence its roots are not solvable.

One of the examples in the book is

This graph from Wolfram Alpha shows you that there are three real roots. A little work shows this polynomial is irreducible, so we’ll not be able to write down any simple numerical formula for the roots – amazing! 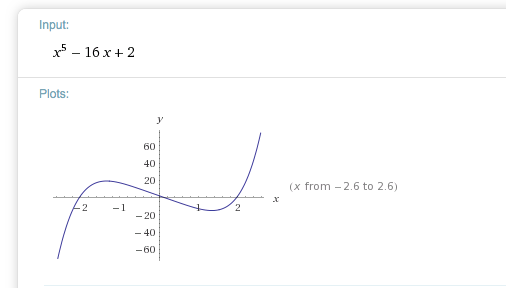 It will be some time before I can share any of these ideas with my kids (ha!), but our Zometool set has allowed us to get a peek at one of the groups mentioned above –

, which is isomorphic to the group of rotations of the dodecahedron. The two projects we’ve done looking at that group have been super fun:

Revisiting 5 tetrahedrons in a dodecahedron

It has definitely been fun thinking about some of the incredible ideas I saw in undergraduate math. Makes me wonder what advanced ideas you might be able to share with kids to get them to say whoa!