Christopher Long has written a little bit about some old interview questions the Charlotte Hornets asked when they were looking for quantatative analyist:

The question itself isn’t what caught my eye as a good introductory question, but rather one piece that you have to do to get started.

Here’s the Wikipedia page describing how the NBA lottery works:

The NBA draft Lottery as described by Wikipedia

The page includes this chart showing the probability of a team getting a particular draft pick in the lottery based on their rank at the end of the season (being ranked #1 in this chart means you finished in last place, btw): 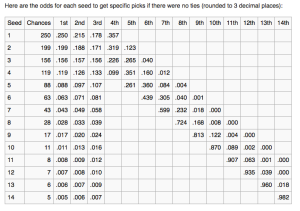 So, the neat introductory probability and stats problem is this – based on the description of how the NBA draft lottery works in the Wikipedia article, recreate that chart!

There are a few different ways to do it, and all, I bet, will lead to some neat conversations about probability.