Saw a neat tweet from Dave Radcliffe this afternoon:

My younger son had a half day of school today and I was looking for a short project to do with him – this game fit the bill perfectly!

Basically I launched the game and turned on the camera. Here’s what a kid seeing the game for the first time thinks:

Although he struggled to make the first set of shapes, you can see right away that the game gets kids thinking about factoring in a non-standard way. Having figured out at the end of the last video that a correct solution will fill the whole square, we made a second attempt. There’s lots of great problems to solve in this game:

Next we tried to go to another level of the game, though we didn’t initially know how to do that! Eventually we did find some more levels and gave one a try, and the ideas he learned from solving the first puzzle helped him get through the second level much faster. At the end he even wanted to try to make his own level!

So, a really great game for kids. Nice little puzzles to solve, and also a sneaky way to get kids thinking about factoring. Fun little project!

I was visiting MIT last week and was lucky to receive two “dark matter boxes” from the MIT Physics department: 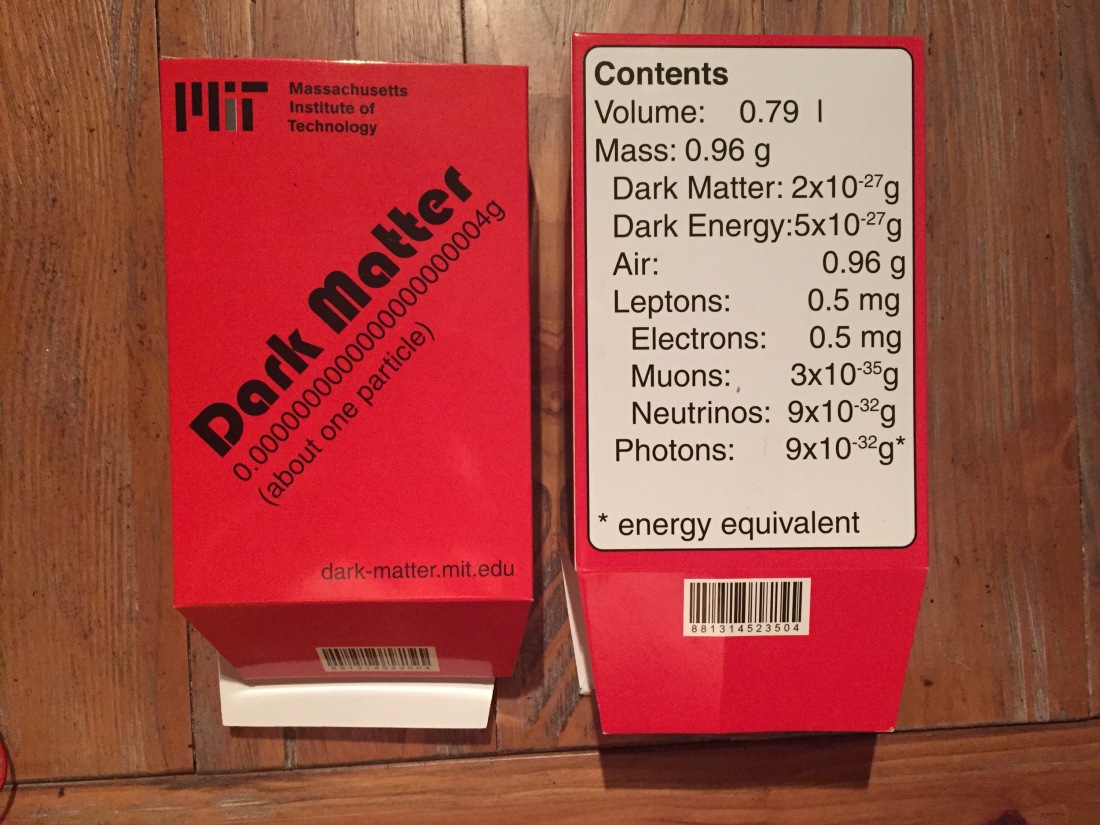 Tonight we finally had some time to sit down and talk about them. It was a fun conversation about both math and physics.

We started by just talking about what the boys saw written on the boxes and about what some of the terms met. At the end of this part of the conversation my older son asked a really great question!

So, at the end of the last video my older son wondered why the box said that the universe was made up of 23% dark matter if there was only one particle of dark matter in the box. Basically 0% of the box is dark matter – how do you get to 23%?

. It turns out that there are (at least) two places in the universe where a number close to

appears. First, the mass of the Earth is approximately

grams. Second, the diameter of the observable universe is about

meters. We use those ideas to try to wrap our heads around

So, a really fun conversation touching on a bunch of fun topics. I’m happy that my son wondered about how one particle per box led to 23% of the universe being dark matter – that was a really fun surprise. Happy, too, to have found a few ways to talk about

– you don’t see that number too often!