After 4 years of home schooling, the boys start in at the local public schools today. It certainly was a fun four years . . . .

Here’s our last, short little project from this morning before the boys head off to school.

My older son had been working on a few old AMC 10 problems. Last night we talked through problem 20 from the 2004 AMC 10a – a challenging geometry problem which had given him a lot of trouble. This morning I asked him to try solving the problem again:

Here’s a direct link to the problem:

Here’s his solution from this morning:

My younger son was working on a few old AMC8 problems. Problem 7 from the 1986 exam gave him a bit of trouble today, so I asked him to work through it and see if we could figure out where he was getting stuck:

[before I even start writing . . . this post is probably going to be pretty long and pretty poorly written. Got lots to say but don’t have lots of time.]

Saw this tweet this morning and it was on my mind all day:

Not that any one answer is going to be perfect, but my completion to the “library is to reading as _______ is to math” analogy is “the internet”. I’ll throw out a few ideas that I’ve used with my own kids to back up that completion. Maybe there was some way to see some similar ideas when I was a kid and I wasn’t looking in the right places, but it sure seems like there’s a ton of great math online just waiting for kids to discover right now. The world of math really is at your fingertips today.

Before jumping into the online stuff, though, I’ll sort of stay with the library idea and start with books. A couple of books that I received at the end of my sophomore year in high school were my first introduction to non-school math and really helped me fall in love with math. Those books were Michael Guillen’s “Bridges to Infinity”, Petr Beckman’s “A History of Pi”, and Doug Hofstadter’s “Goedel, Escher, Bach”.

I’ve kept the letter from I received from the former head of the math department at my high school, Virginia Lee Pratt, ever since I received these books:

Lately there have been several great math books directed (mainly) at a general audience that have inspired fun projects with the kids. Ed Frenkel’s Love and Math inspired this project:

Ed Frenkel, the square root of 2, and i

Jordan Ellenberg’s How not to be Wrong inspired several projects including this fun one about infinite series:

Evelyn Lamb’s recommendation of David Reimer’s Count Like and Egyptian led to three really fun projects with the boys (and a way of multiplying that I’d never seen before):

3 project from Count Like and Egyptian are linked here

Now for the internet . . . there are incredible math resources online right now that bring some of the most amazing ideas in math right to your computer. Perhaps the most jaw dropping for me to see was Terry Tao’s “Cosmic Distance Ladder” public lecture at the Museum of Math in NYC:

This video led to three super fun projects with the kids. Who would have thought that adding fractions tied in with how we understood the solar system!

Several other of the public lectures and activities from the Museum of Math have led to other projects – the whole series is really great. For example:

Numberphile is another amazing source of wonderful math online. Some of our projects that have come from their work are:

Their famous infinite series video led to several projects (including the “algebraic intimidation” project above) and is the reason that my older son thinks that every infinite series adds up to -1/12 🙂 :

An attempt to explain Graham’s number to kids

A series of videos that Vi Hart made several years ago is another fantastic source of fun math on the internet. Her “Wind and Mr. Ug” video is probably the math video I’ve shown to more people than any other one. It is just fantastic:

The last time I showed some kids this video it led to a neat project about generalized Moebius strips:

Another neat bit of online math that Vi Hart was involved in is the game Hypernom. I interviewed several kids while they were playing the game a few weeks ago. Their thoughts about math were really interesting:

Using Hypernom to get kids talking about math

Laura Taalman’s 3D printing blog inspired (and is almost solely responsible for) tons of 3D printing project that we’ve done. Here’s a link to all of them – the first of which has a link to Taalman’s incredible Makerhome blog 🙂

Steven Strogatz has been another source of nearly constant inspiration. This project on the Gosper curve came from a book I saw in one of his tweets:

Richard Green is another math professor who has shared some fascinating math that we’ve turned into fun projects. This one, for example, was an unsolved problem (which was made even more fun when Fields Medalist Tim Gowers weighed in on Green’s post!):

and it isn’t just university math professors – math teachers and math educators are sharing amazing projects, ideas, and teaching ideas all over the place!

Fawn Nguyen has inspired so many projects that I’ve lost count. Here’s a link to all of them – double fun because the project at the top of the link is one that she shared with me in a bar after the Boston NCTM meeting . . . . ha!

Patrick Honner’s posts have also inspired many, many projects. This one was inspired by an interesting observation he made about a 13-14-15 triangle. We actually 3D printed the pieces of this triangle and sent them to him:

Another teacher in NY, Dan Anderson, shares amazing programming projects which have led to tons of fun for us. A recent example of work inspired by Dan is this project about complex mappings:

One other math educator who has given me a lot to think about is Tracy Johnston Zager. Her talk at Shadowcon made me really step back and think about math education:

One other comment on Twitter about where kids can go for math inspiration came from John Golden:

By coincidence, we just did a really fun set of project on the game “checker stacks” this week inspired by Jim Propp’s blog post about John Conway:

Playing around with Prime Climb

Our Zometool set, too, has been never ending source of projects. Our most recent build – a stellated 120-cell – is one of the neatest shapes I’ve ever seen:

A stellated 120 cell from our Zometool set

Here’s another fun Zometool story – some shapes build by one of the kids in the neighborhood who came by to visit with her parents:

. . . and there was this shape built – also by just playing around – by a kid who insisted that she **hated** math: 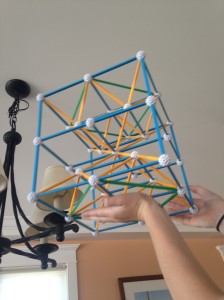 Finally, I couldn’t write about where to look for math inspiration without mentioning Art of Problem Solving. I think their books and their online resources are so good that I basically don’t have the words to describe them. I’m excited to see how the new venture – Proof School – in the San Francisco area goes.

So, as I wrote in the beginning – I knew this would be long, but the thoughts above are what’s been on my mind all day. Sorry for taking so long to essentially say “I think there’s a lot of great math online that can be really inspirational for kids” – but there is. I hope that the kids who are looking for math inspiration are able to find some of these amazing resources.