Saw a link yesterday to blog year in review and it made me want to summarize my year in blogging. The other blog listed their top 10 most read posts and top 10 favorites to write in 2014. I’ll do top 5 for each:

First, my most read piece – by a mile – was not a math piece but one about ultimate frisbee. Skyd magazine wrote about 21 influential people in ultimate and included hardly any women. My response was here:

21 people in and around Women’s ultimate you should meet

Someday I hope my math posts can be as popular as my rare ultimate frisbee posts. Not in 2014, though . . .

My top 5 most read math posts were:

This was a project inspired by a neat geometry problem that Dan Meyer posted on his blog. One fun part about the project was talking about the “other” solution to the problem.

This post was a look back at some of the fun math ideas that I saw in 2014. Part of the inspiration for this post was David Coffee’s post asking the question Whose Fault is it that you aren’t good at math? His interesting response to the question is that a large part of the reason that you “aren’t good” at math is that you didn’t have the right mathematical experiences. I wanted to show that that there are so many fun math experiences being shared on line these days, that the fun math experiences are much easier to find than they’ve ever been.

4: A small mistake in Numberphile’s video about Graham’s Number

This is an odd one because the high number of views isn’t due to the content of the post – which was just a short reaction to a Michael Pershan post on twitter – but to Cliff Pickover linking to the picture at the beginning of the post: 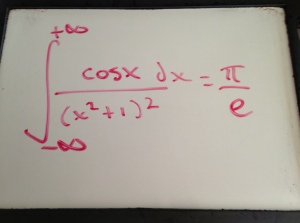 6: A 3D Geometry Project for Kids and Adults Inspired by Kip Thorne

Since #5 wasn’t really due to the content of the post, I’ll include the 6th most popular – a project inspired by an interview I saw with Kip Thorne about his work on the movie Interstellar. This was a super fun project and is a nice way to transition to the posts I enjoyed writing the most . . . .

And the 5 project that I enjoyed the most:

1: The Kip Thorne project was part of a larger group of projects I did with the boys where I used talks or writing by mathematicians as the starting point for a project. The project below (the 3rd in a series of 3) using Terry Tao’s public lecture at the Museum of Math as a starting point to talk about math with kids was really fun:

You can also search on the blog for similar project based on Jacob Lurie’s Breakthrough Prize talk, a Bryna Kra talk at the Museum of Math, several different Evelyn Lamb blog posts, and many ideas from Fawn Nguyen and Patrick Honner.

Probably no blog post I read all year made me as happy as this post from Dan Anderson. He asked his kids to give short talks about the kind of math that they’d like to learn more about, and they came up with an amazing list of topics. If there’s one post I would recommend to anyone interested in math education it would be this post by Dan. Wish I could have seen the presentations:

3: When my evening was similar to Fawn Nguyen’s evening.

Just after finishing up the Kip Thorne project – like 5 minutes after finishing it! – I saw a couple of posts on Twitter from Fawn Nguyen. It turned out that we’d be working on really similar projects with Zometool sets that evening. I’ve used so many of Fawn’s blog posts with my kids and it was fun to think that we were working on the same ideas that night without even knowing it! Also, the stuff you can do with kids using Zometool sets is amazing 🙂

When my evening was similar to FAwn Nguyen’s Evening

4: Adding in binary with Duplo Blocks

A couple of years ago when my older son was learning about binary we built a “binary adding machine” out of Duplo blocks. It was a super fun project and I got to return to it this year with my younger son. It is such a fun way to learn about place value and build number sense:

Adding in binary with duplo blocks

I enjoyed Ellenberg’s “How not to be Wrong” and the section where he discusses the standard proof that 0.999… = 1 caught my eye as a potential fun project to work through with the boys. I especially liked Ellenberg’s concept of “algebraic intimidation” that he talks through in this section of the book, and decided to revisit the old Numberphile video showing that 1 + 2 + 3 + . . . = 1/12 with the boys as an example of “algebraic intimidation.” This project was particularly fun because my younger so is so bothered (as in actually physically bothered) by that result. He knows in his heart that it can’t be true, but the algebra all seems right – hence the intimidation part of Ellenberg’s idea.