I’ve been paying attention to math a little more in 2014 than I have in previous years and thought it would be fun to put together a list of fun math-related things I’ll remember from this year:

Dan asks his students to talk about things they would like to learn more about in math class, and the students talked about subjects ranging from topology to diving scoring. I was really happy to see the incredibly wide range of topics that the kids thought would be interesting. Beautiful post by Dan and a fantastic list of topics chosen by his students – this one made a big impression on me:

We bought a 3D printer early in the year and it allowed us to do a bunch of math projects that wouldn’t have occurred to me in a million years. Most of those projects came either directly or indirectly from reading Laura Taalman’s 3D printing blog. As 3D printing becomes cheaper and hopefully more available in schools, Taalman’s blog is going to become the go to resource for math and 3D printing. It is an absolute treasure:

An early post of mine about the possibilities of 3D printing in education is here:

and one of our later projects is here:

It has been nearly a year since Numberphile’s fun infinite series video hit the web. I know people had mixed feelings about it, but I loved seeing a math video spark so many discussions:

I’ve used so many of their videos to talk math with my kids, I’m not even sure which of them to pick for examples. Here are two:

(7) Fields Medals and the Breakthrough Prizes

Erica Klarreich’s coverage of the Fields Medals over at Quanta Magazine was absolutely amazing. Two of her articles are below, but all of them (including the videos) are must reads. Her work her made it possible for anyone to meet the four 2014 Fields medal winners:

A really cool opportunity to understand the work of one of the Fields Medal winners came when the Mathematical Association of America made an old Manjul Bhargava’s paper available to the public. I had a lot of fun playing around with this paper (that he wrote as an undergraduate, btw). It made me feel sort of connected to math research again:

The Breakthrough Prizes in math didn’t seem to get as much attention as the Fields Medals did, which is too bad. The Breakthrough Prize winners each gave a public lecture about math. Jacob Lurie’s lecture was absolutely wonderful and a great opportunity to show kids a little bit of fun math and a little bit about the kinds of problems that mathematicians think about:

I’m glad to see more and more opportunities for the general public to see and appreciate the work of the mathematical community. Speaking of which . . . .

(6) Jordan Ellenberg’s “How Not to be Wrong”

Jordan Ellenberg’s book How not to be Wrong is one of the best books about math for the general public I’ve ever read. I have it on audiobook and have been through it probably 3 times in various trips back and forth to Boston. My kids even enjoy listening to it – “consider the set of all integers plus a pig” always gets a laugh.

One of the more mathy takeaways for me was his discussion of infinite series and what he calls “algebraic intimidation.” Both led to fun (and overlapping) discussions with my kids:

Talking with about Infinite Series

The Mega Menger project was a world wide project that involved building a “level 4” Menger sponge out of special business cards. We participated in the project at the Museum of Math in NYC. The kids had such a good time that they asked to go down again the following weekend to help finish the build. 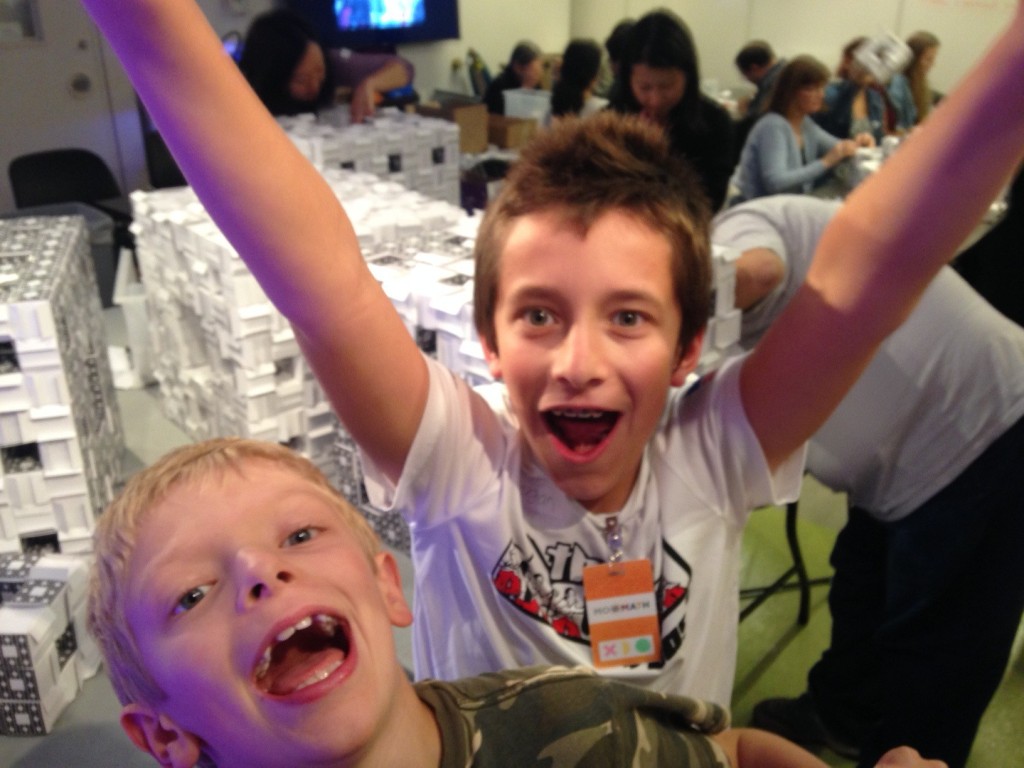 It was nice to see so many kids involved with the build in New York. It also made for another fun opportunity to explore the math behind the project a little more deeply:

The Museum of Math and Mega Menger

(4) People having a little fun with math and math results

For some family fun, check out the new game Prime Climb:

our review is here:

A review of Prime Climb by Math for Love

Also, don’t forget to have a little fun when tweeting about new and important math results. Like Jordan Ellenberg tweeting about the solution of an old Paul Erdos conjecture:

For me the math laugh of the year was Aperiodical announcing the results of an 8 year search confirming the 44th Mersenne Prime:

Evelyn Lamb’s blog is a must read for me. I love the wide range of topics and am pretty jealous of her incredible ability to communicate abstract math ideas with ease. Her coverage of the Heidelberg Laureate Forum was sensational (ahem Breakthrough Prize folks, take note!). This post, in particular, gave me quite a bit to think about:

A Computer Scientist Tells Mathematicians How To Write Proofs

My thoughts on proof in math are here:

Proof of the irrationality of sqrt(2) OTD: this beautiful geometric one http://t.co/ml56McXO88 also here (proof 7) http://t.co/CDXcKXMB6J

led to a great little project with the boys:

Irrationality of the Square root of 2

(2) Terry Tao’s public lecture at the Museum of Math

On of the most amazing lectures that I’ve ever seen is Terry Tao’s public lecture at the Museum of Math. I don’t know how it had escaped my attention previously, but I finally ran across it about a month ago. What an incredible – probably unparalleled – opportunity to learn from one of the greatest mathematicians alive today:

Explaining a few bits of his talk in more detail led to three super fun projects with the boys:

When one of the top mathematicians around is tweeting about projects going on in a 6th grade classroom 2000 miles away, the world is working the right way!

Fawn is producing and sharing some of the most interesting math projects for kids that I have ever seen, and I’m super happy that her work is getting recognized. She’s probably inspired more than 20 projects with the boys, and I can’t wait for the next 20 in 2015. Here are two from this year:

A 3d Geometry proof without words courtesy of Fawn Nguyen

If you have even a passing interest in fun, exciting, and generally kick-ass math projects for kids – you have to follow Fawn.