Over the last few days I’ve been working through some pretty difficult place value problems with my younger son.  These problems come from the “Algebra with Integers” section of Art of Problem Solving’s Introduction to Number Theory book.  As I wrote yesterday part of the difficulty is that we haven’t really covered any algebra yet.

Despite the lack of familiarity with algebra, my son seems to really like these problems.  He is absolutely fascinated when we arrive at the answers and is amazed that some of the problems have more than one answer.  The problems are all like the one in the video below:

Tonight I tried to throw in a little curve ball – how many two digit integers are 11 times the sum of their digits?  I wasn’t sure if he would see that this situation was impossible right away.  He didn’t, which was lucky because I really wanted to see how he would react to the algebra telling him there were no solutions.  Initially that math gave him a little trouble, but I loved seeing him realize that something was wrong without being quite sure what it was:

Definitely a fun couple of days.  I like these problems both for the easy introduction to algebra and for the place value review.   They also serve as a surprise example of a “low entry / high ceiling” problem.   I hadn’t really thought about this feature of these problems until I saw this challenge problem involving digits and decimal representation from Christopher Long on Twitter yesterday:

Puzzle – is there a number of inches that can be converted to centimeters by moving the last digit to the front? Assume 2.54 cm per inch.

Pretty sure that the first time I saw a problem of this type was in the book Lure of the Integers by Joe Roberts which shows this interesting result: 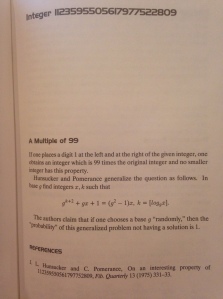 The problems on Twitter are obviously a little harder than the ones I’m covering with my son, but I think older kids would probably like them a lot.   Even just showing some of the solutions might catch a kid’s interest since It is pretty surprising to see how large the solutions are.   I love simple to state problems that turn out to be a little more difficult than you might initially think!

Always happy to see the math I’m covering with the boys overlap in some small way with the math people are sharing on Twitter!

2 thoughts on “A neat coincidence with place value problems”